Oh my gosh, i can pee upstairs....bathroom update edition 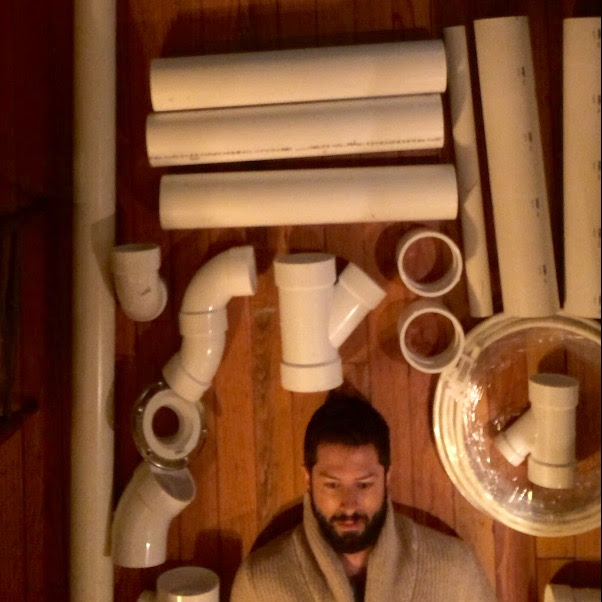 So this is my idea of a wild friday night.  All this pipe is going to replace the old cast iron and then some.  The plan was to run a new soil pipe from the second floor through the bathroom and connect it to the existing soil pipe.  I thought whilst I was at it I would replace most of the cast iron pipe as well with PVC just for good measure.  There is one little piece left that connects to the vent pipe and is basically in the stone wall foundation so i had to draw the line somewhere, I mean i only had 3 days... 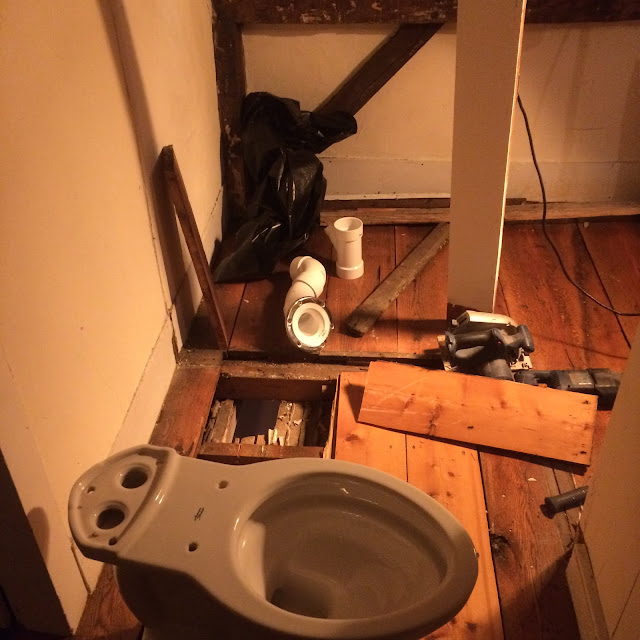 This is where the new WC is to be installed.  This is what is affectionalty called "davids room" as my friend always stays in this room.  There was a wall here, as you can see in the photo below.  This is directly above the bathroom below and was the logical place for the toilet.  I bit of planning went into the down pipe as I didn't want to have to move the bath and what not downstairs and I can't go through the wall as all the giant beams that hold the house up are in there.  That left me with the option you will see.  The toilet is in just the right spot (as long as your not over 6ft) to be able to stand under the eaves.  Any one who is tall will have to sit down :-) And yes this post deals with poop pipe....beware 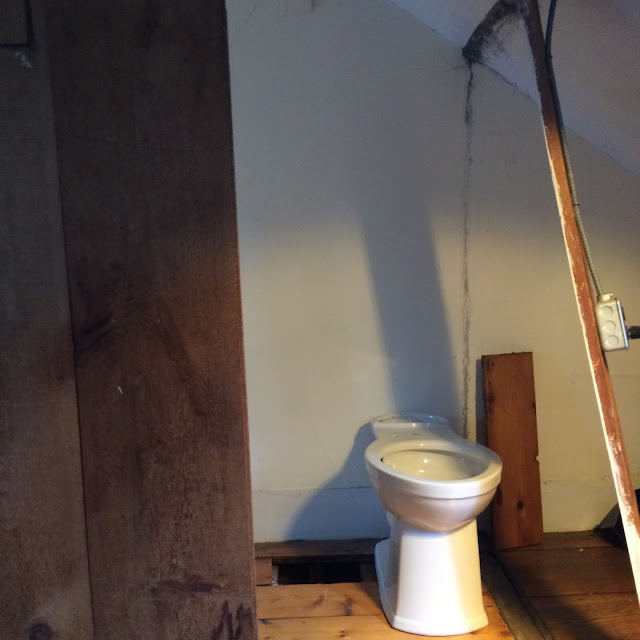 This is my second toilet.  The first delivery (from amazon) was smashed.  Top tip, don't order a toilet online if you don't have too.  It turned up like a smashed vase with no chance of it being put back together! 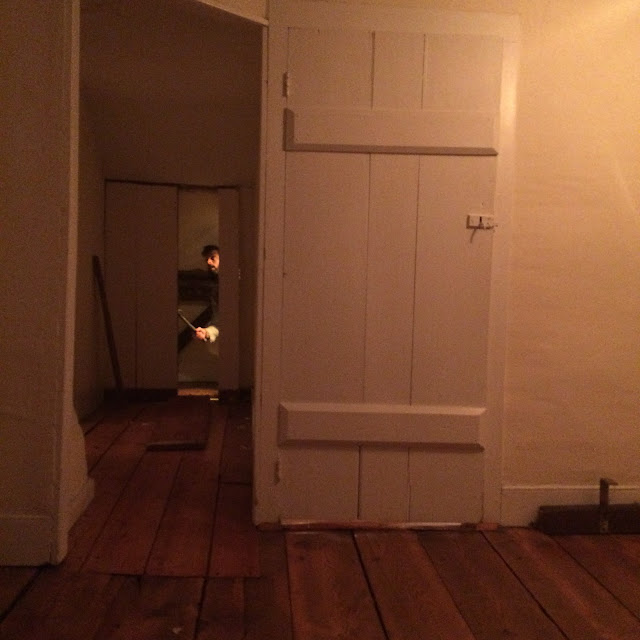 My "heres Johnny" moment.  Not the first one in this house and probably not the last! 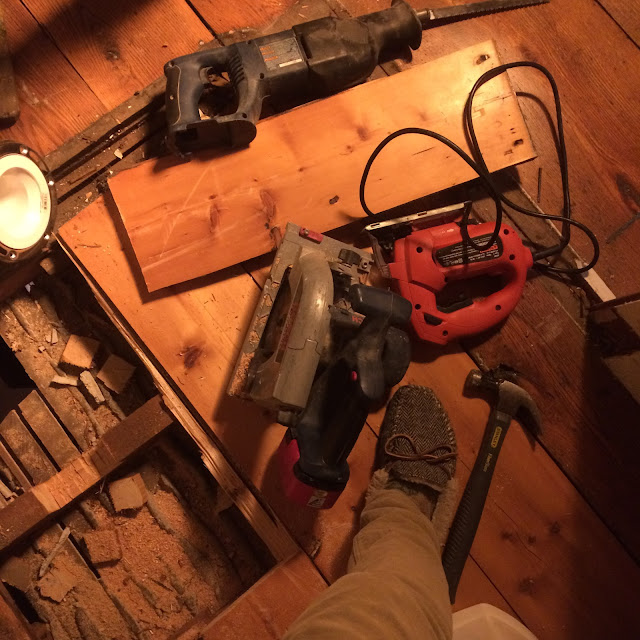 I find herringbone slippers totally appropriate working footwear.  Yes I know its right next to the circular saw.  When I post that I sawed my toe off you can all say i told you so, until then i will have cozy feet and multiple toilets.. 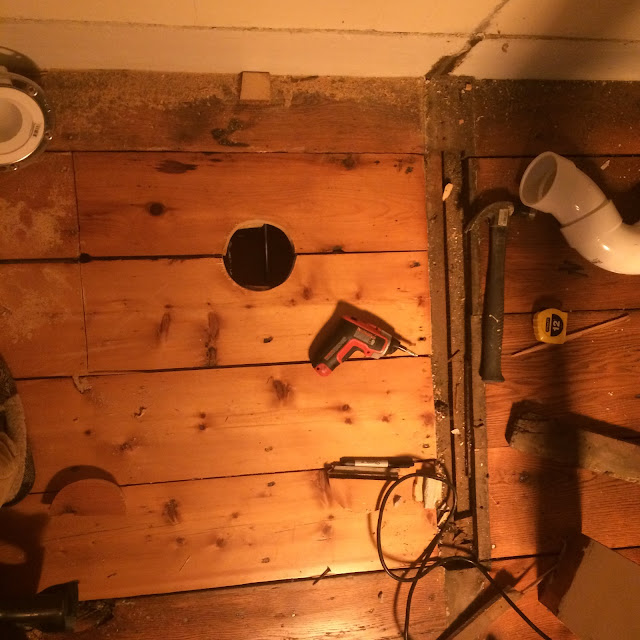 Wow i felt so accomplished on Friday night when I got this far, little did i know the next three days of grunt work... 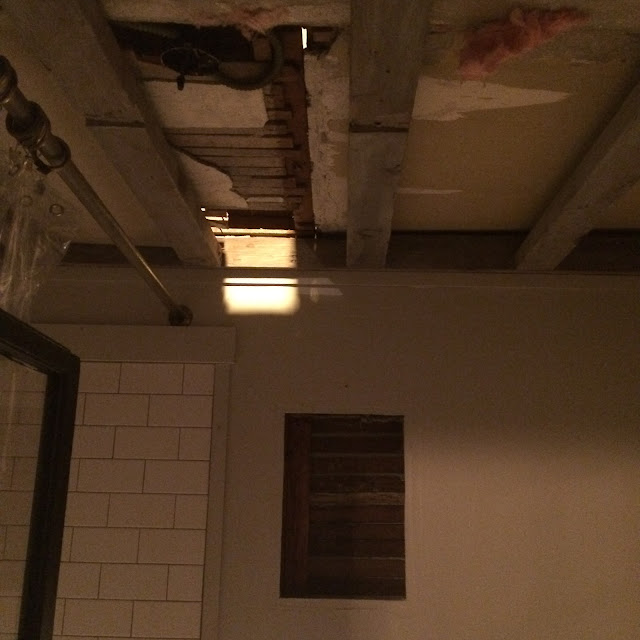 Remember in the summer when i redid the down stairs bathroom, well I started to undo all that good work.  This is the wall where the pipes need to run up in to the second floor. I decided to build a bump out to house the pipes and create it as if its an old chimney or something like that.  I have always had a bunch of inspiration images of completely tiled walls and loved this idea. The hope was that this would look like that. 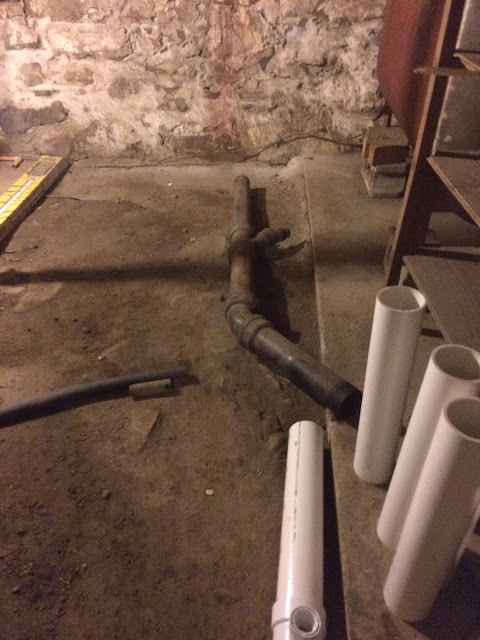 This is the old "poop" pipe that nobody wanted anything to do with.  I did a balancing act of getting it down with the use of a step ladder and the old shelf unit.  Funnily enough the thing I was most concend about was cutting this out and that was one of the simplest parts.  I made sure to get the diamond cut blade made for cast iron cutting, I actually got the right tool for the job.  Also it was clean as a whistle inside so nothing gross to report there, take note David and Malcolm. 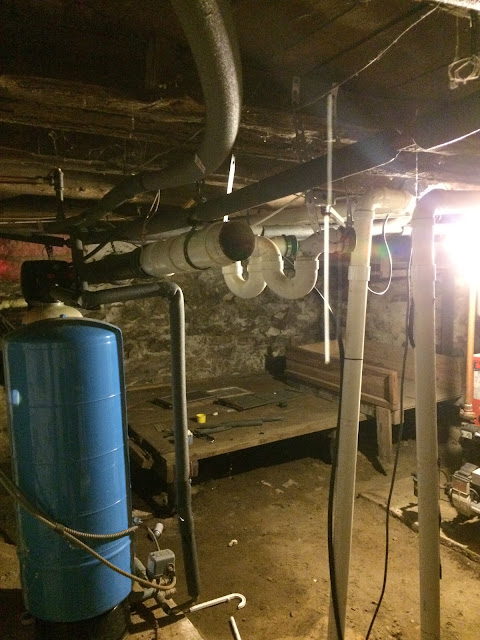 Another glamour shot of of the basement. 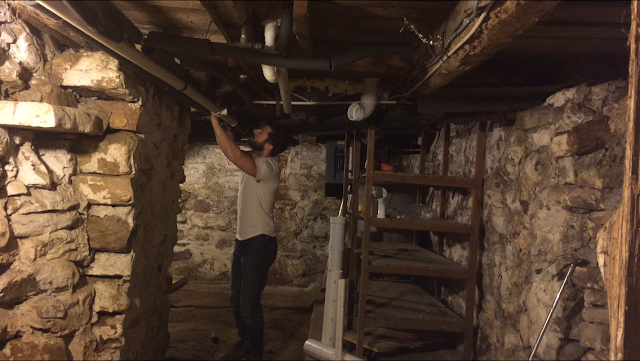 As always with these projects one things leads to another.  That being, moving a hot water pipe, disconnecting the run from the kitchen and the bath, re routing the cold water pipe.  I did and do have this idea of a grey water system (if anyone has any info on that let me know). The washing machine dumps so much water in the to the septic system is seems silly to have it going through here, but for now I reconnected.  In the future I would like to have a grey water well out the side so the WM can go into there.  There was never a machine in the house before I moved in so I'm always concerned about the amount of water washing into the system and removing all the good bacteria needed.  I won't bore you with more septic talk ! 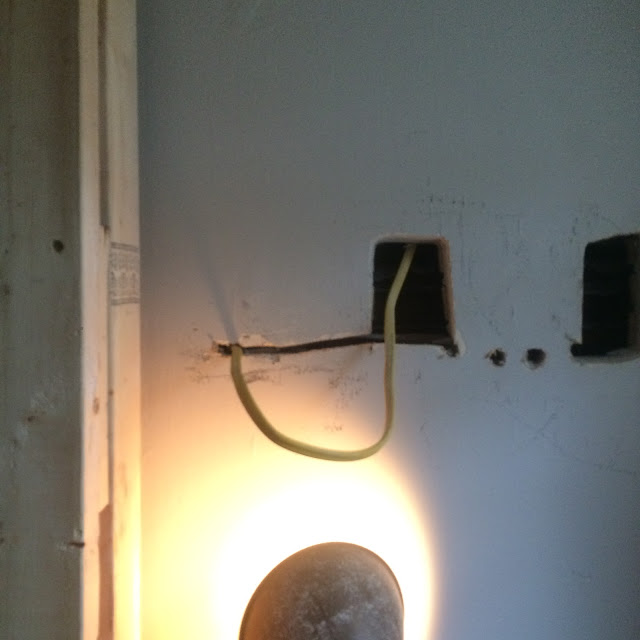 Whilst I had the wall all cut up and decided to run a new electric line up to the new bathroom from a very underused electric run from the basement.  This way when I connect the heater up there it can have its own line and not trip or over stress another electric run.  Let me tell you threading this line into the basement was a pain.  I went up and down about ten times before i finally fished it through. 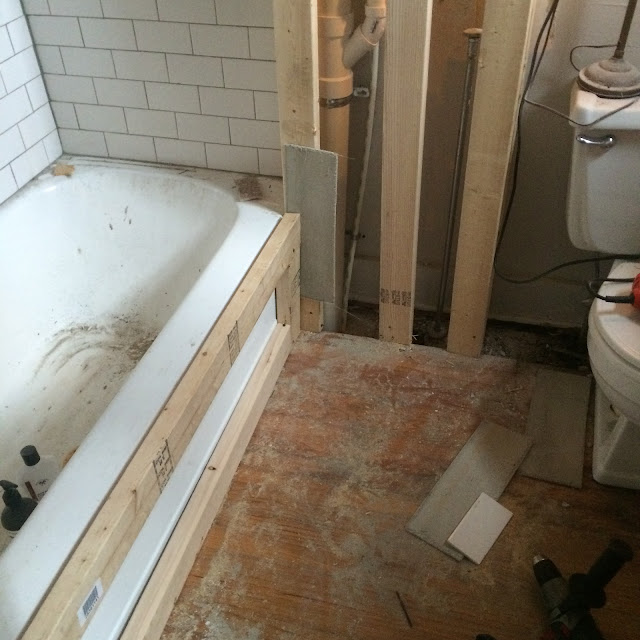 Once the pipes were in it was full force on the frame out.  I also wanted to clad the side of the tub in tile so it all felt built in.  Funny story here, saturday evening around 4:45 I was all done with the pipe, had ran the cold water up to the second floor and was all ready to install the toilet.  There I am screwing in the toilet bolt to the flange ready to drop the toilet on.  Then I dropped the bolt down the soil pipe.  Thats when you just have to laugh.  After all that work I had to then take a sawzall to the pipe to open it up again to fish out the damn bolt, mainly because I didn't want it causing a block in the future.  Then i had to re seal the pipe up again.  And then i drank.... 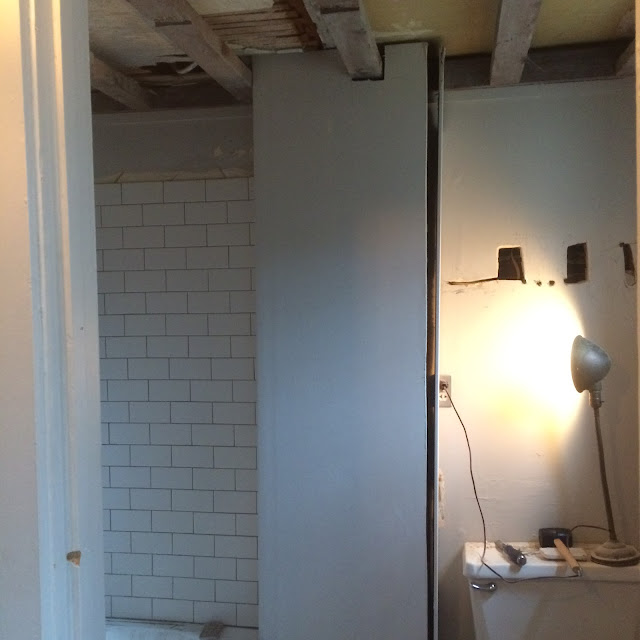 Sunday was a little more productive and felt like it was really coming together. Some days it just flows and you feel like your achieving a lot. Drywall, toilet installed and flushing.  Bingo! Sunday night at my usual 4 am call to pee, I didn't have to trek downstairs.  Not as liberating as i had hoped, but come summer it will be great when the house is full again. 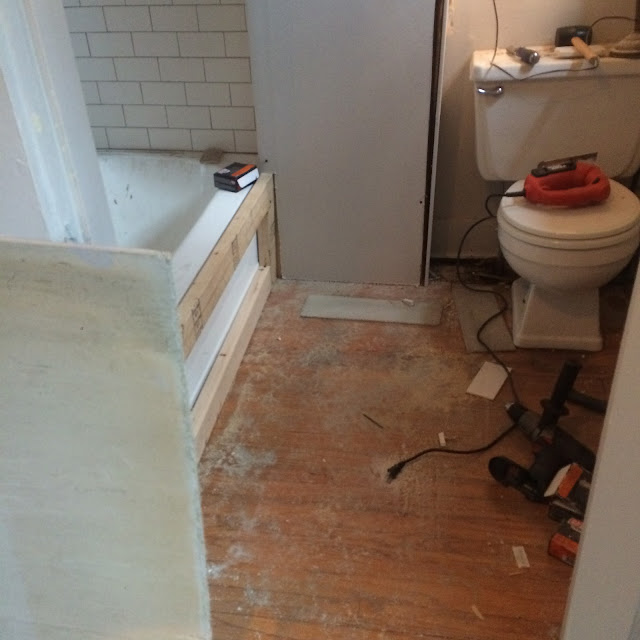 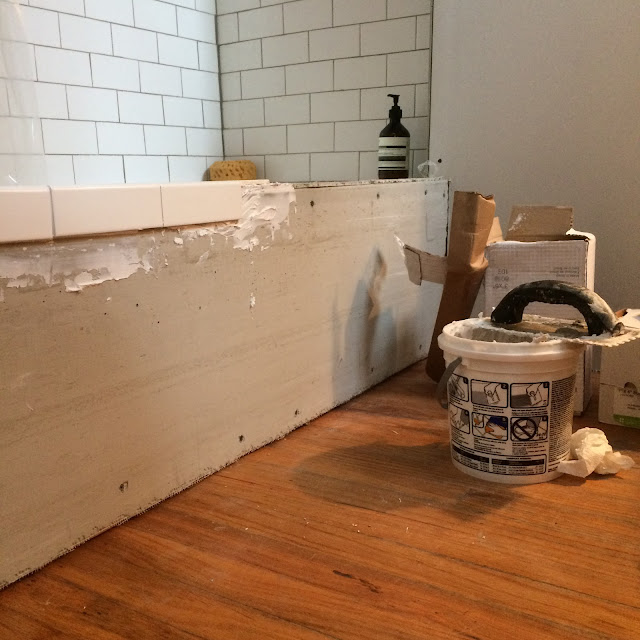 The lip on the bath surround going in.  Again as in the last post I still never manage to fully clean out the room.  Also by Sunday I really wanted a shower! 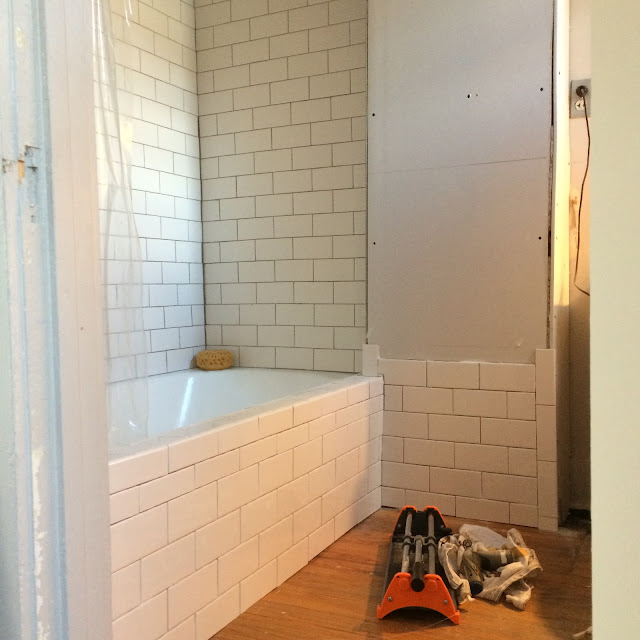 Tiling full force on sunday.  I also managed to re do the cement board in the ceiling between the beams.  I had done it in a bit of a rush in the summer so I wanted to do it properly this time.  Sliding insulation in between the layers and around the new piping so that it is sound proofed and insulated. 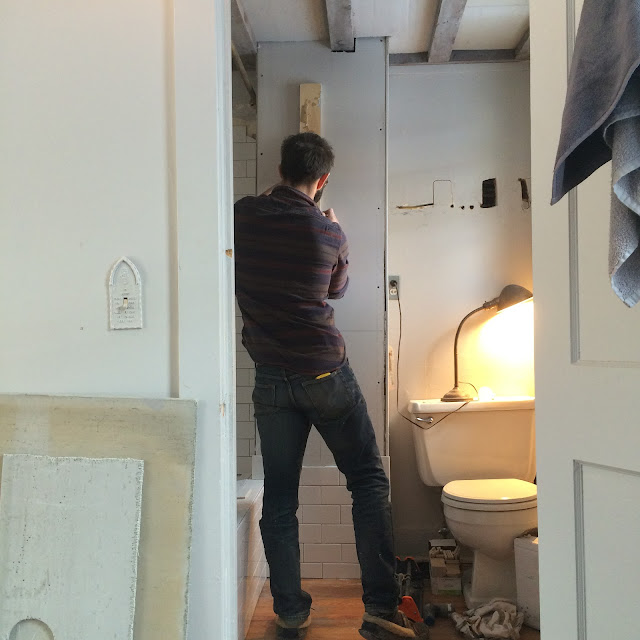 Learning my lessons as I go.  I always rush tiling but this time I made sure to mark out the wall with levels and really figure out the placement and properly cut the tiles.  This wall is front and centre so it has to look good. 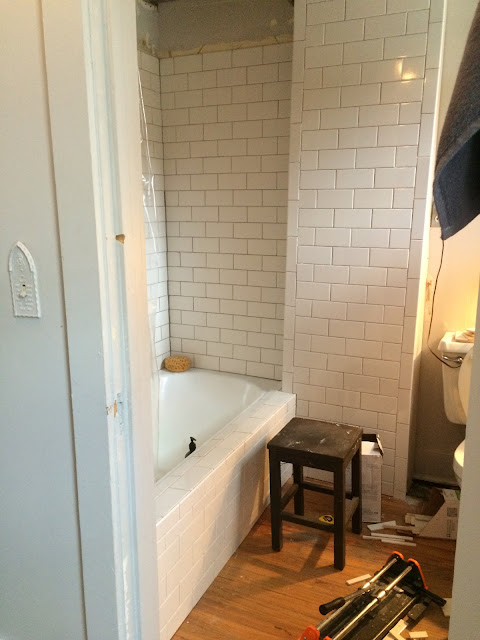 This is how for I got by Monday.  I have the perfect old brass wall light for here and then a mirror to go below it.  Im going to continue the tiling across the whole back wall and then have some sort of old brass shelves or something.  Thats the fun bit.. 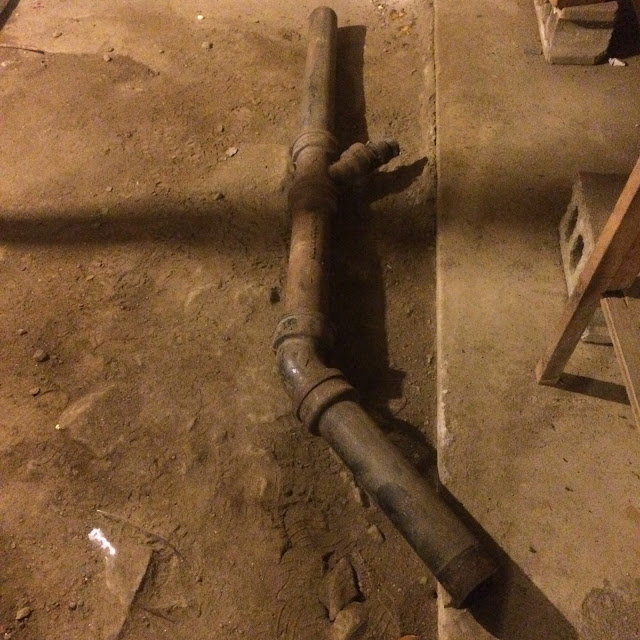 The beast of the old pipe. 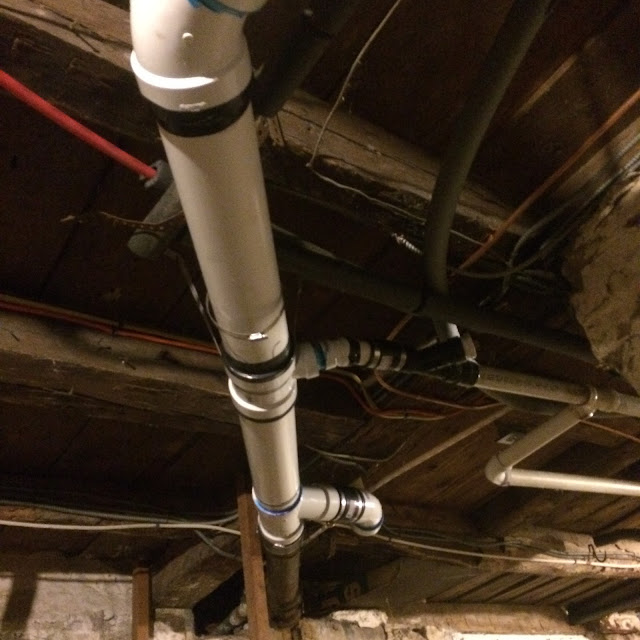 The new view in the basement.  Doesn't seem that much after all.  All the joints are glued and then silicone taped for extra measure.  I feel the floors sighing again as some more weight is take off them, that old cast iron weights a ton. 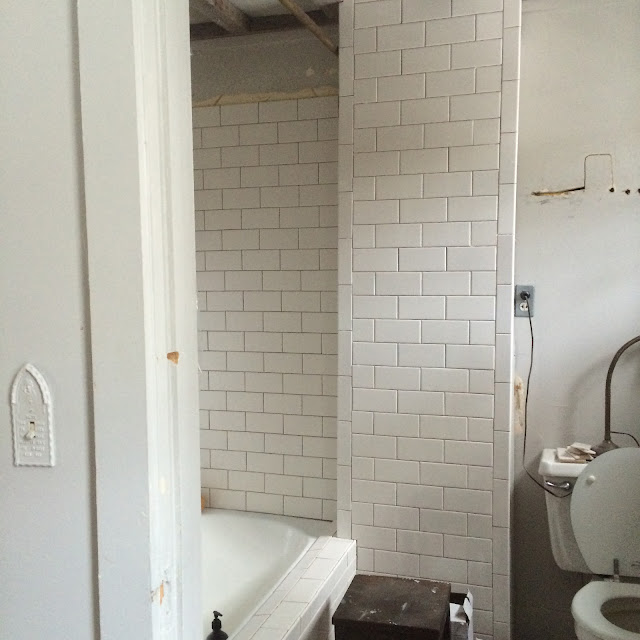 Really pleased with the way its looking, bring on next weekend when I want to finish up the tile and hopefully dry wall the upstairs part and then also paint the floor in here...stay tuned
B