Weekend update...fire surrounds, plumbing miracles and a truck that worked 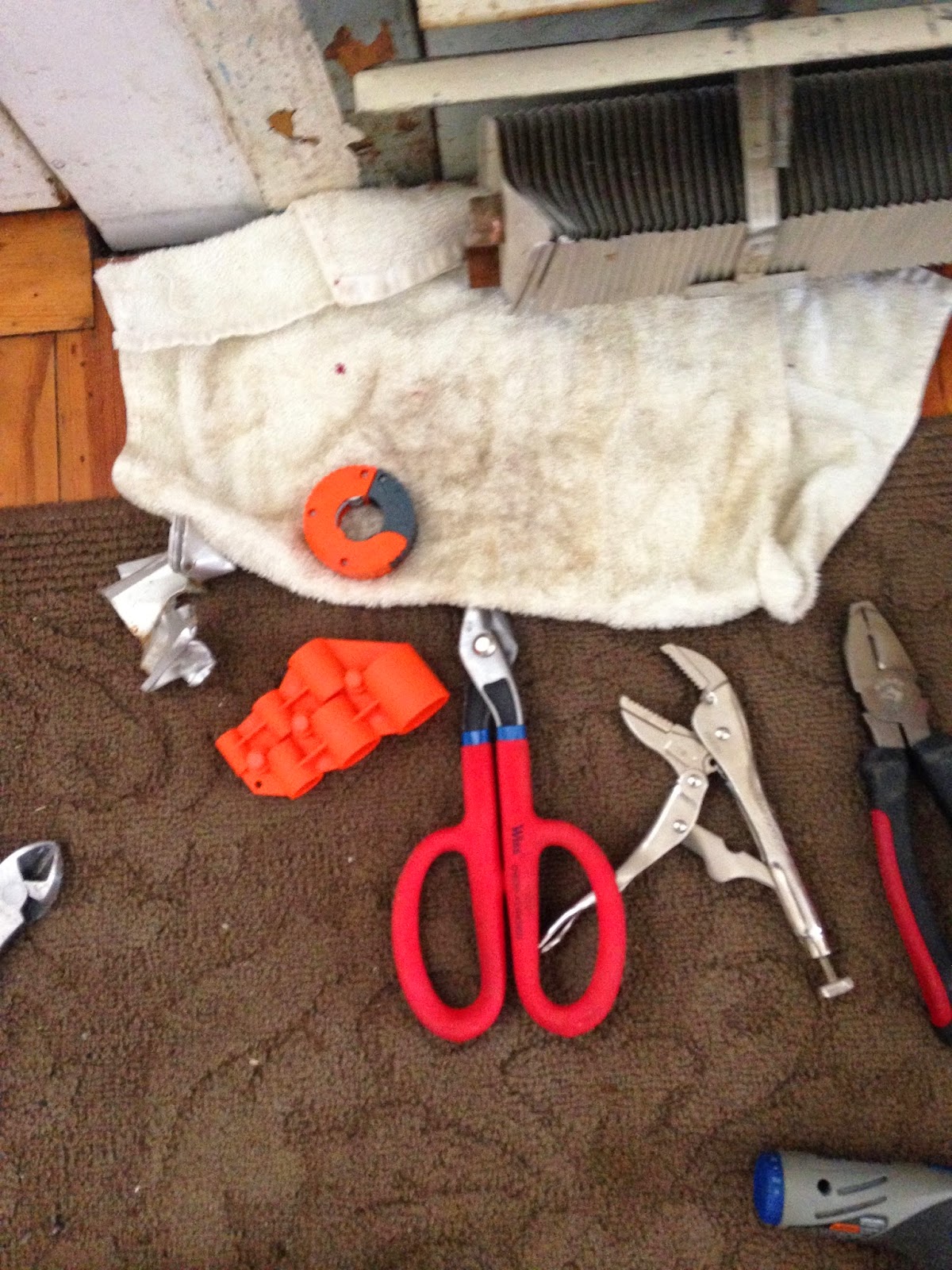 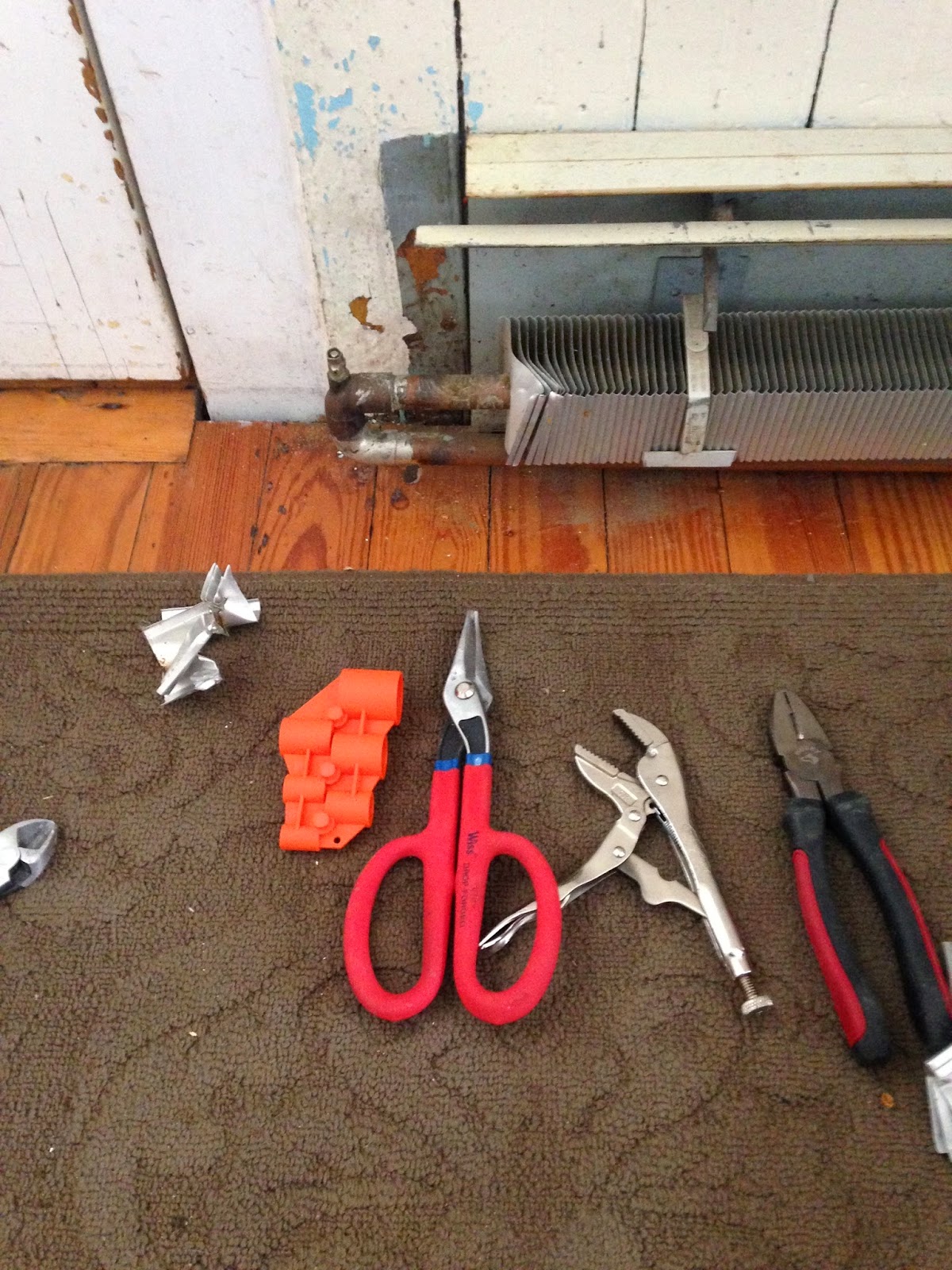 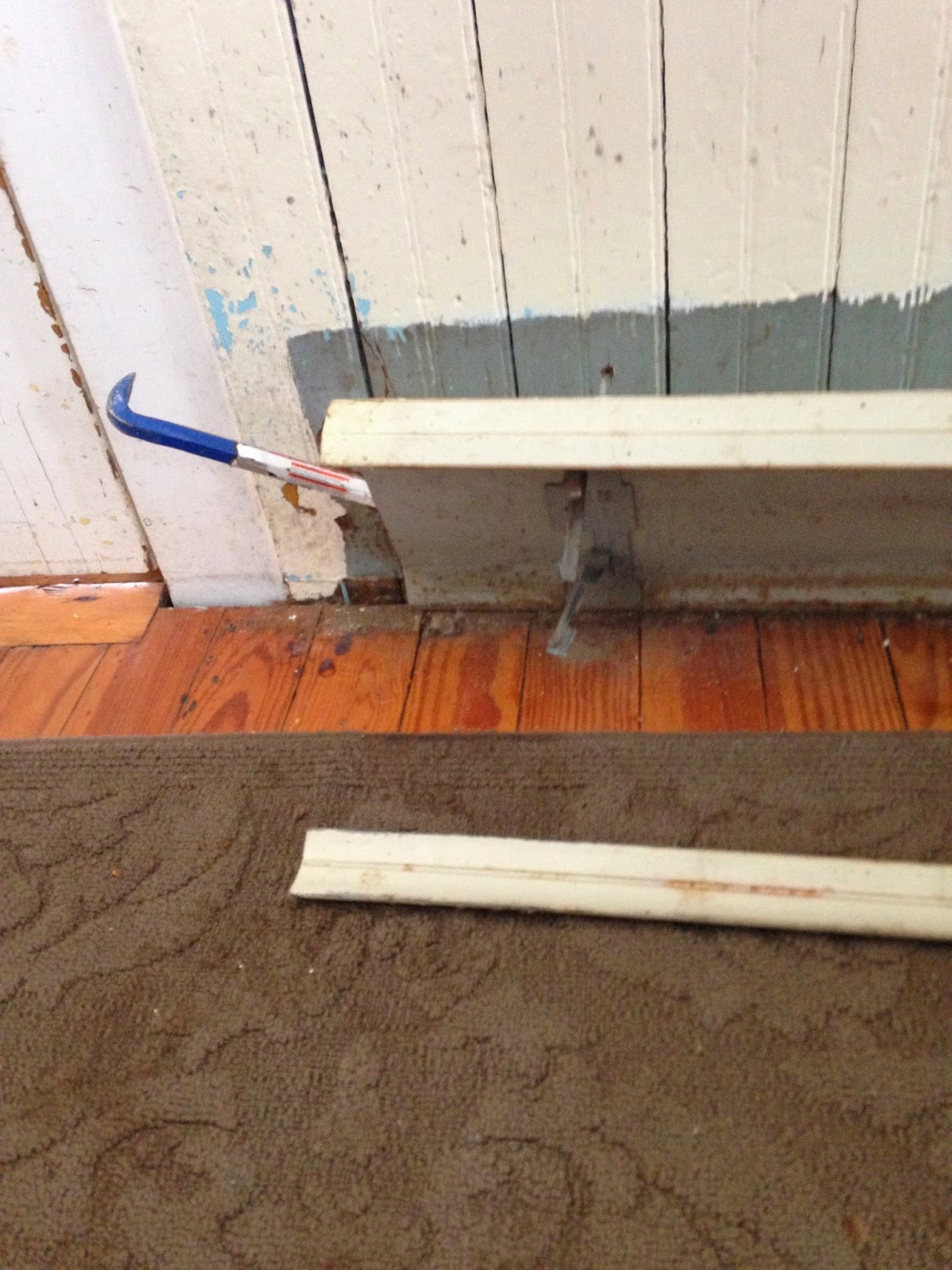 Can you spot the difference?  The photo on the left had the "u" bend and the one on the right doesn't.  You know why? that round orange thing, the pipe cutter, helped me cut that piece off.  Why you ask? Well i think in the last post i rambled on about having to move the base board to move the stove to move the sink...blah blah blah.  Here is what moving the base board looks like. This as with many of my projects is a cheat.  Instead of "sweating" the joint with a blow torch, which in my defense is did try, i simply cut the bit i needed off.  Now i did this as it was the easiest and low techy way to do it.  There is a whole range of new plumbing fixtures called shark bite.  Ill keep it short for those of you who don't care for the details.  Anyway they are push to fit, so you just need 1" of clearance and they push on to the pipes and hey presto you have a water proof joint.  Before doing all this i was in the basement draining the system and generally spending some time understating my boiler system.  A few other things in the pic if your interest.  Tin snips (big red handles) to pull the fins off.  Clamp pliers (don't know the real name, but they are so handy) and regular pliers. The the big orange plastic thing that looks like fisher price made it is a burning tool.  It takes the sharp edges off the pipe to make a cleaner join.  Still awake? Read on the plumbing really is the interesting part... 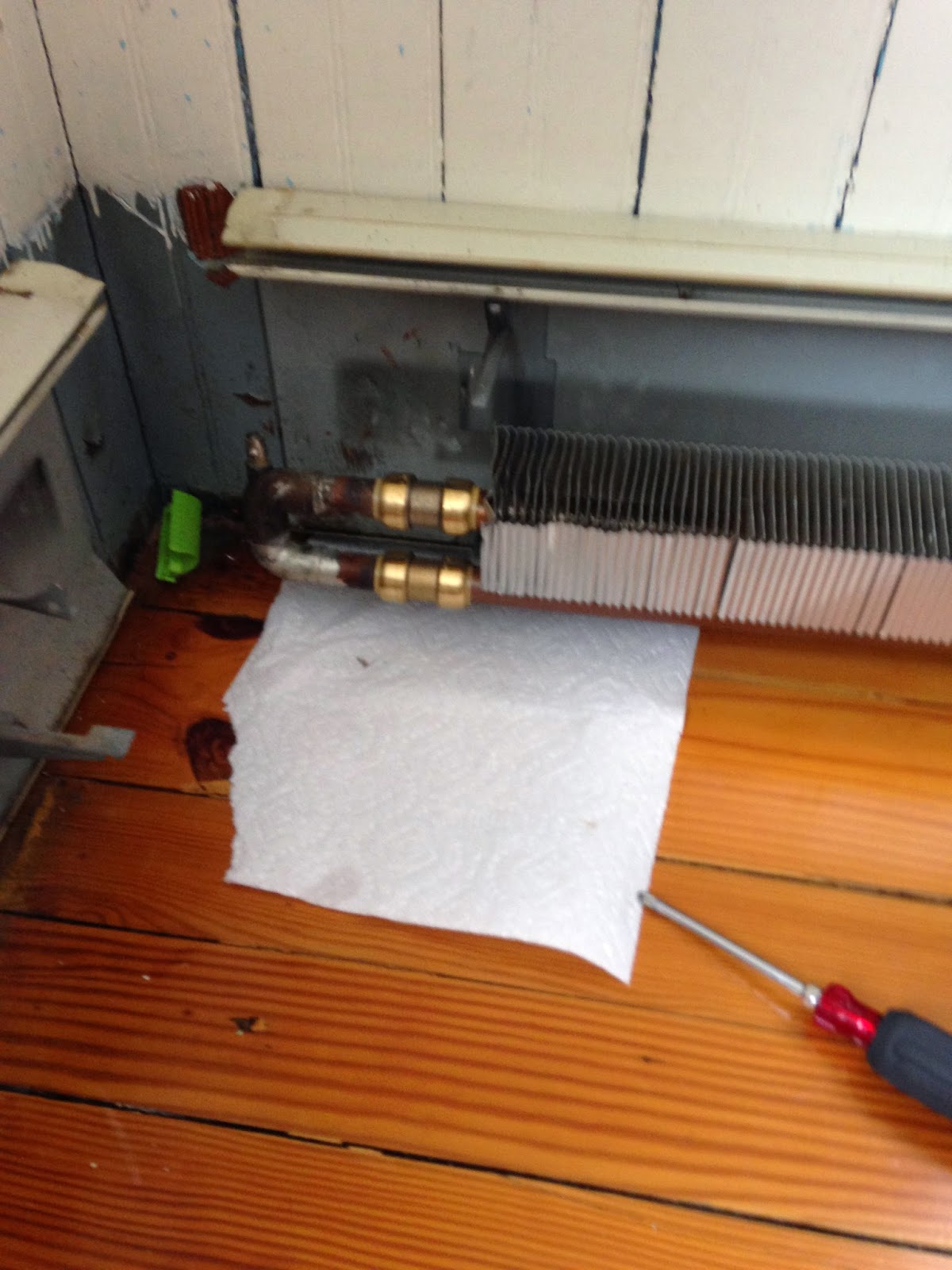 Now on the left you can see the "u" reattached with the shark bite fixtures.  They are more pricey than just copper that you would solder in to place but they is no risk of you soldering badly and leaking and then having to re drain the system.  The other photo is me very triumphantly removing the base board that i needed too.  This was a successful Friday morning!!  Interestingly enough the color behind the base board is a grey color, darker than i want to do but non the less there it is.  Its like the house knows me! 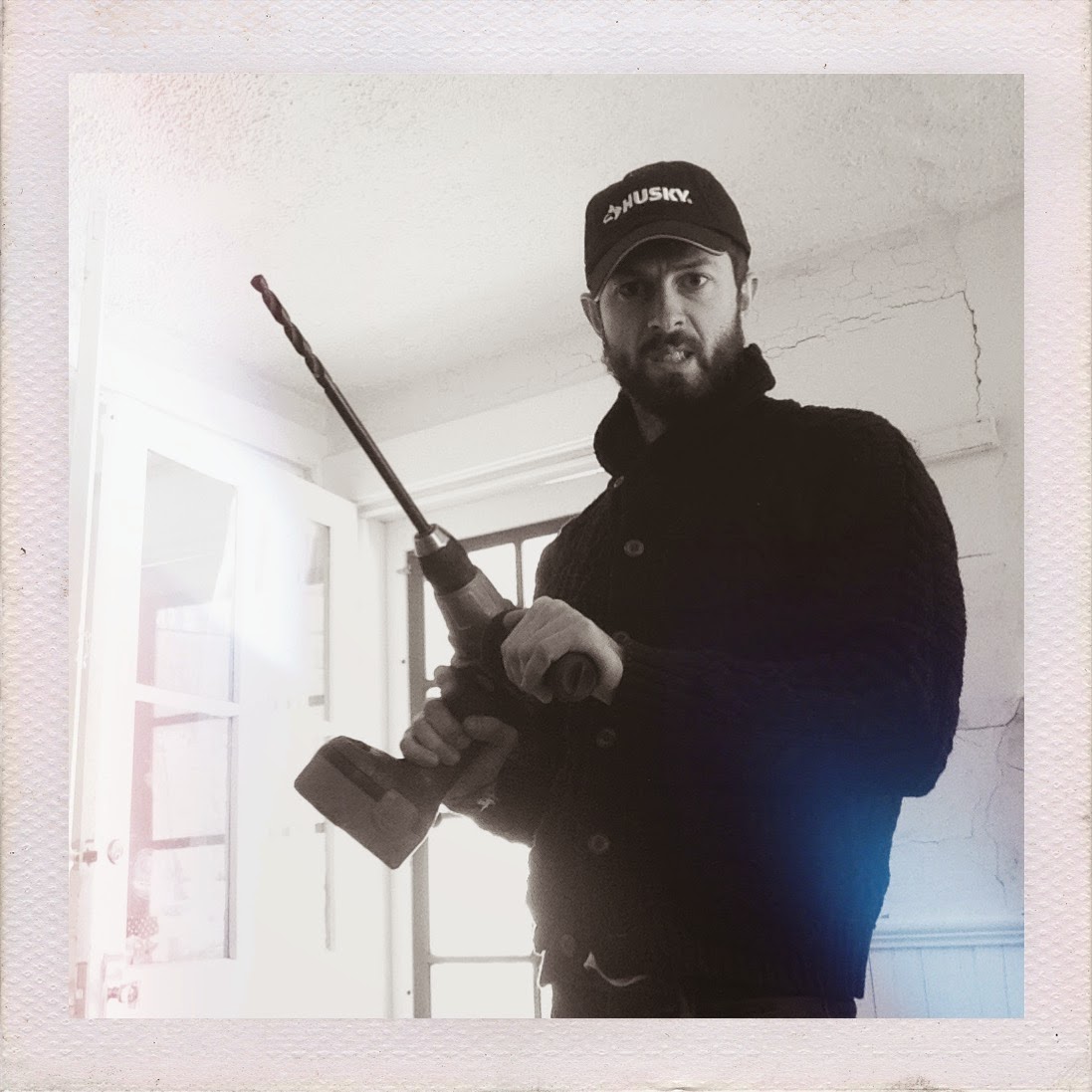 Me newly confident that i didn't flood the house, so i took to drilling a large hole through the wall of the house to move the gas line, not recommended but i really wanted to move the stove.  All went well and by lunch time on Friday i had got a lot done.  How to reward myself? A trip to home depot and then on to home goods.  Yeh this is really adrenaline causing activities out here :-) 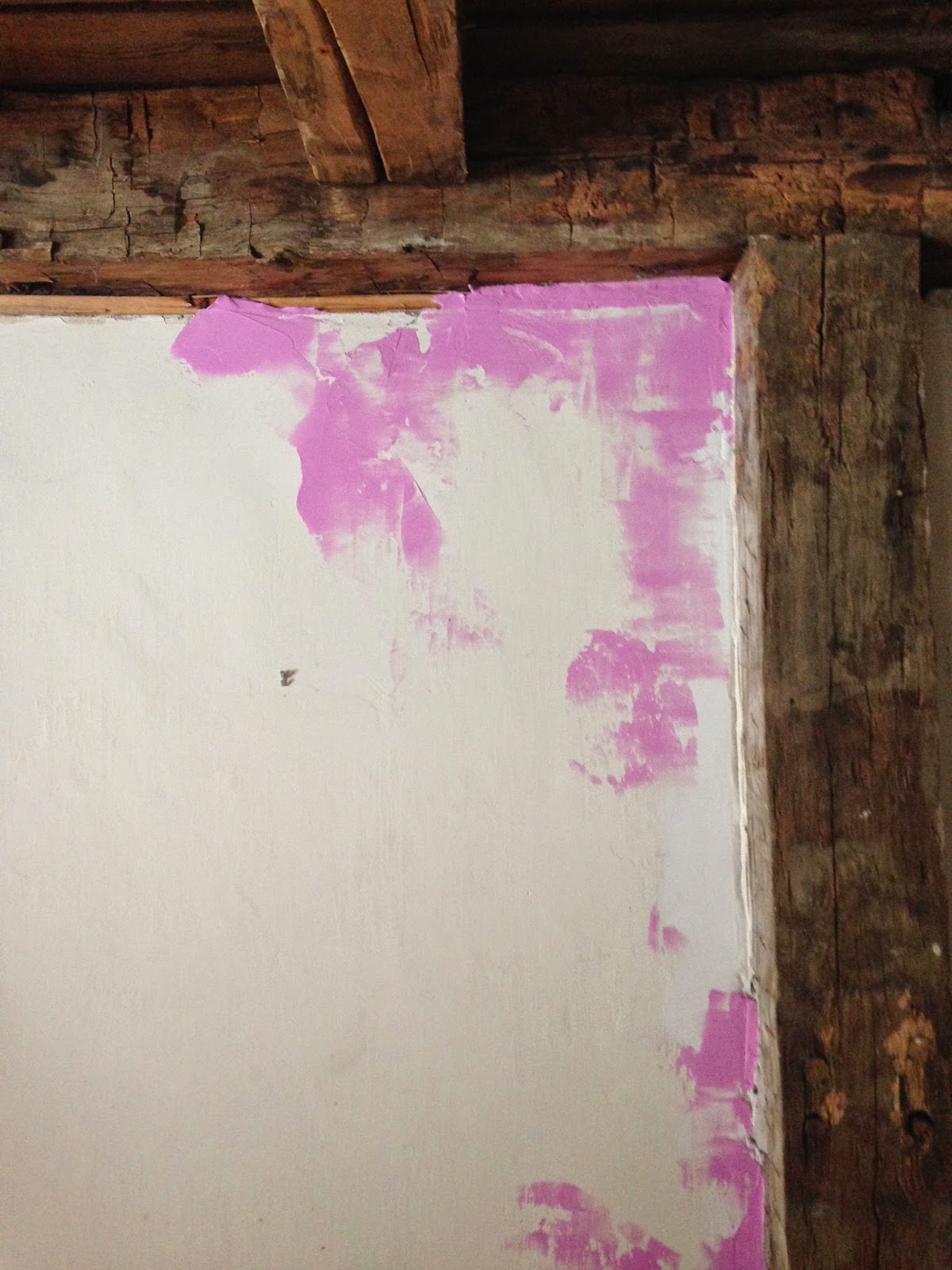 Don't worry i haven't lost my mind and painted the walls pink.  This is spakle, it goes on pink and dries white.  This is another boring process shot of me filling the walls and somewhat prepping them for paining.  They are staying quite rough, to go with the beams and also because i can have them rough, how i like them.  Not to everyones taste, and in the city when i was dry walling and plastering i hated getting them perfect, so tedious, so its nice just to have a more crackled and hand done effect. The main idea was to draught proof.  Any large gaps i to spray foam in and the covered with plaster. 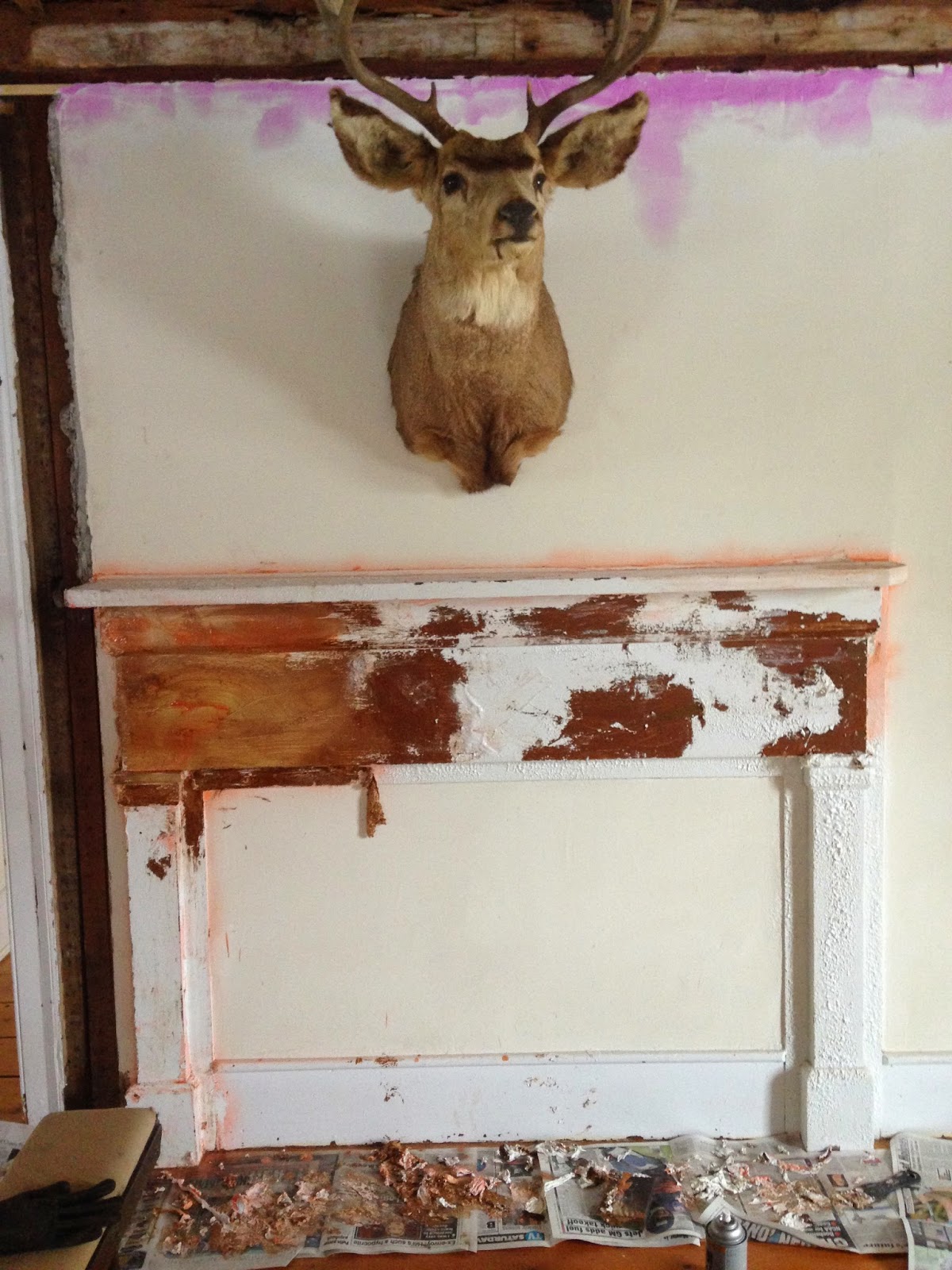 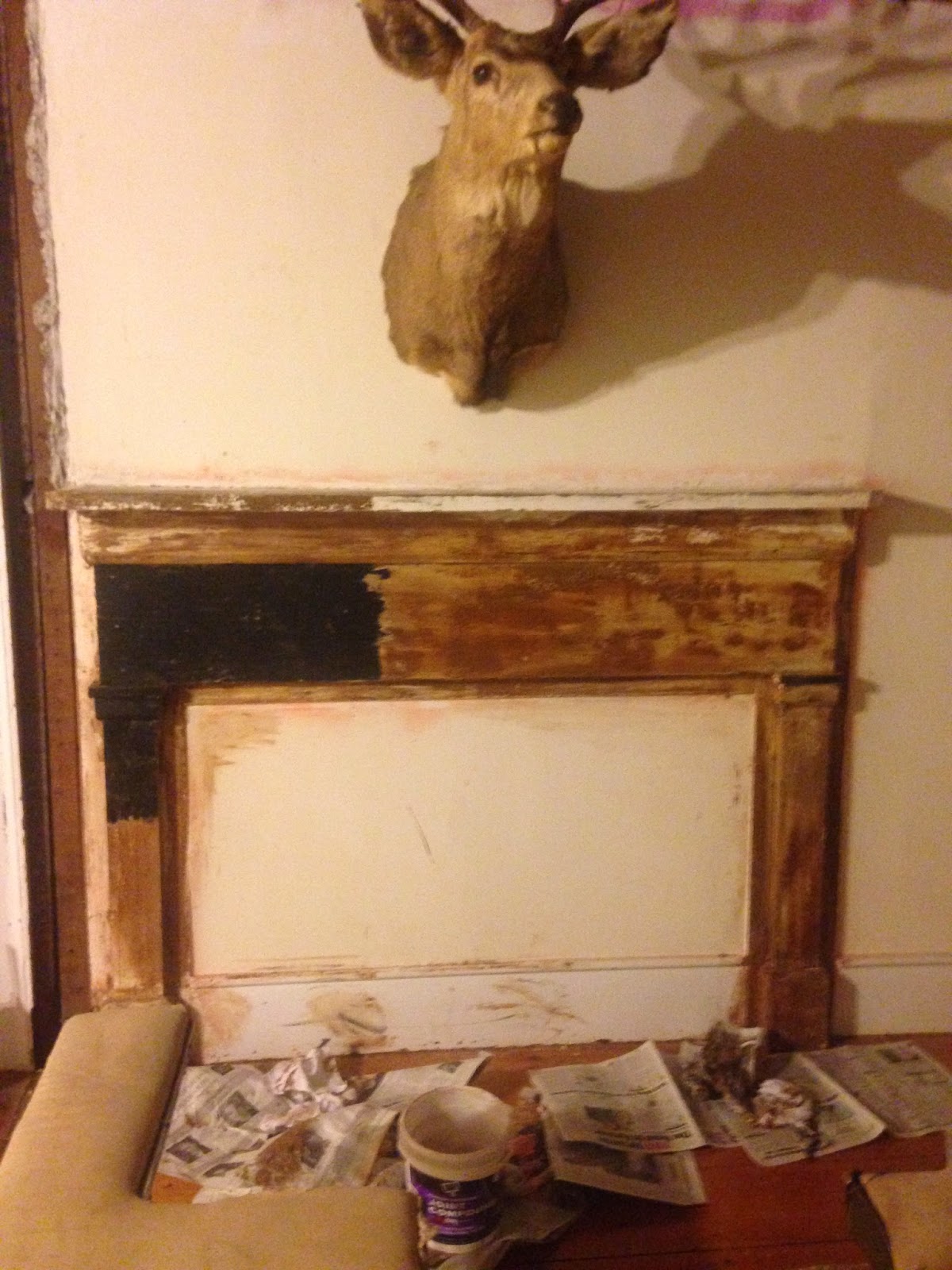 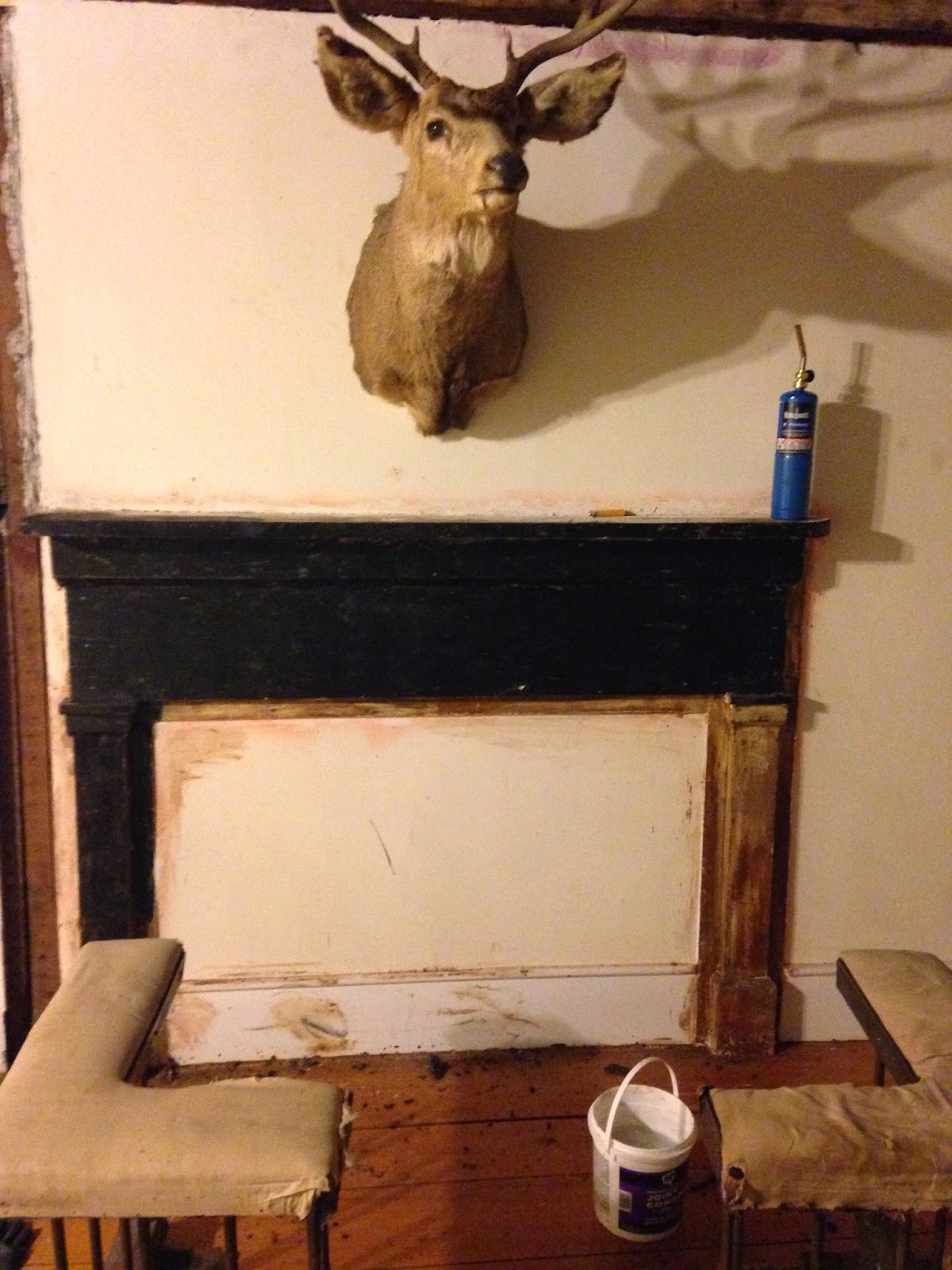 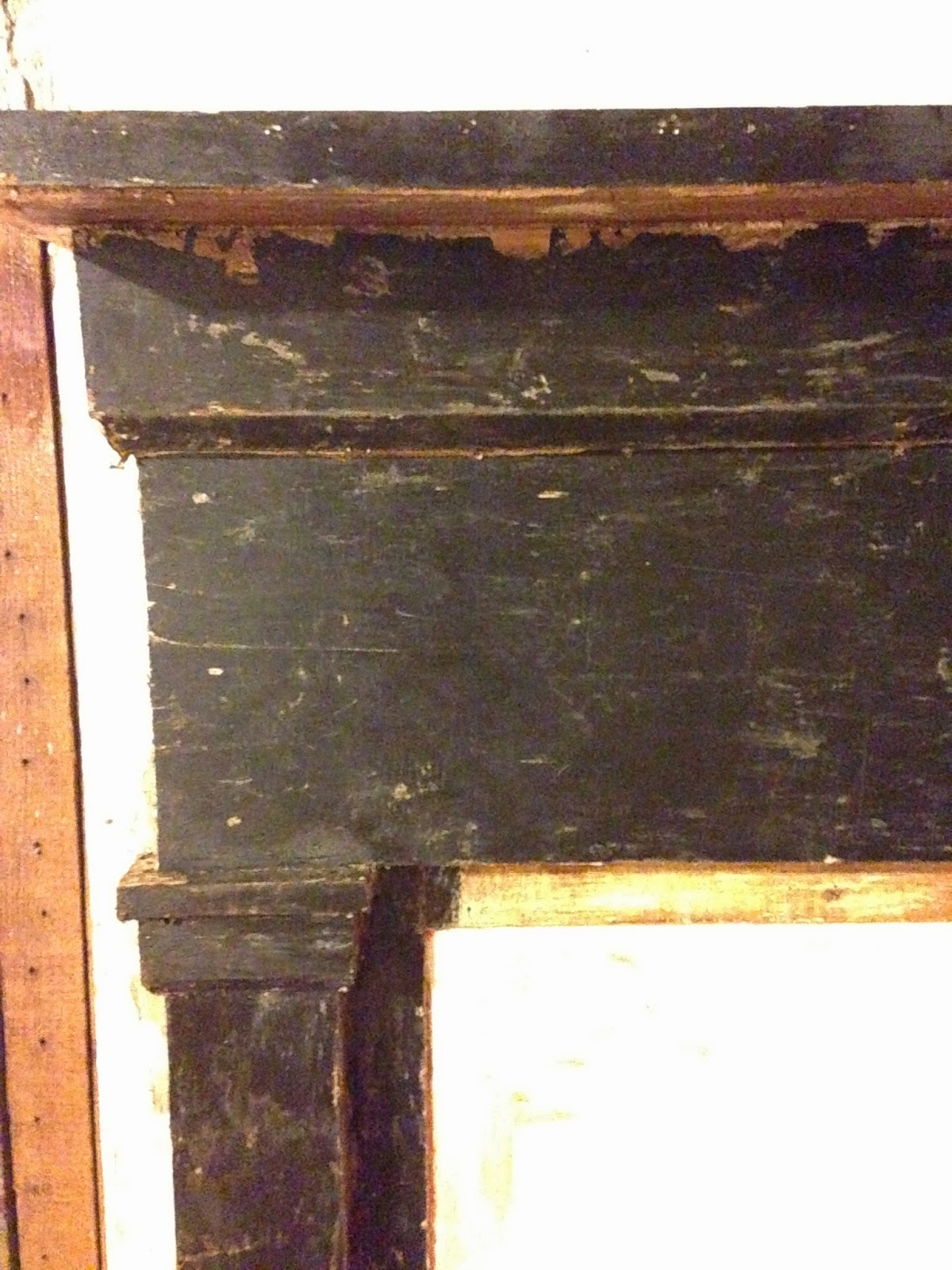 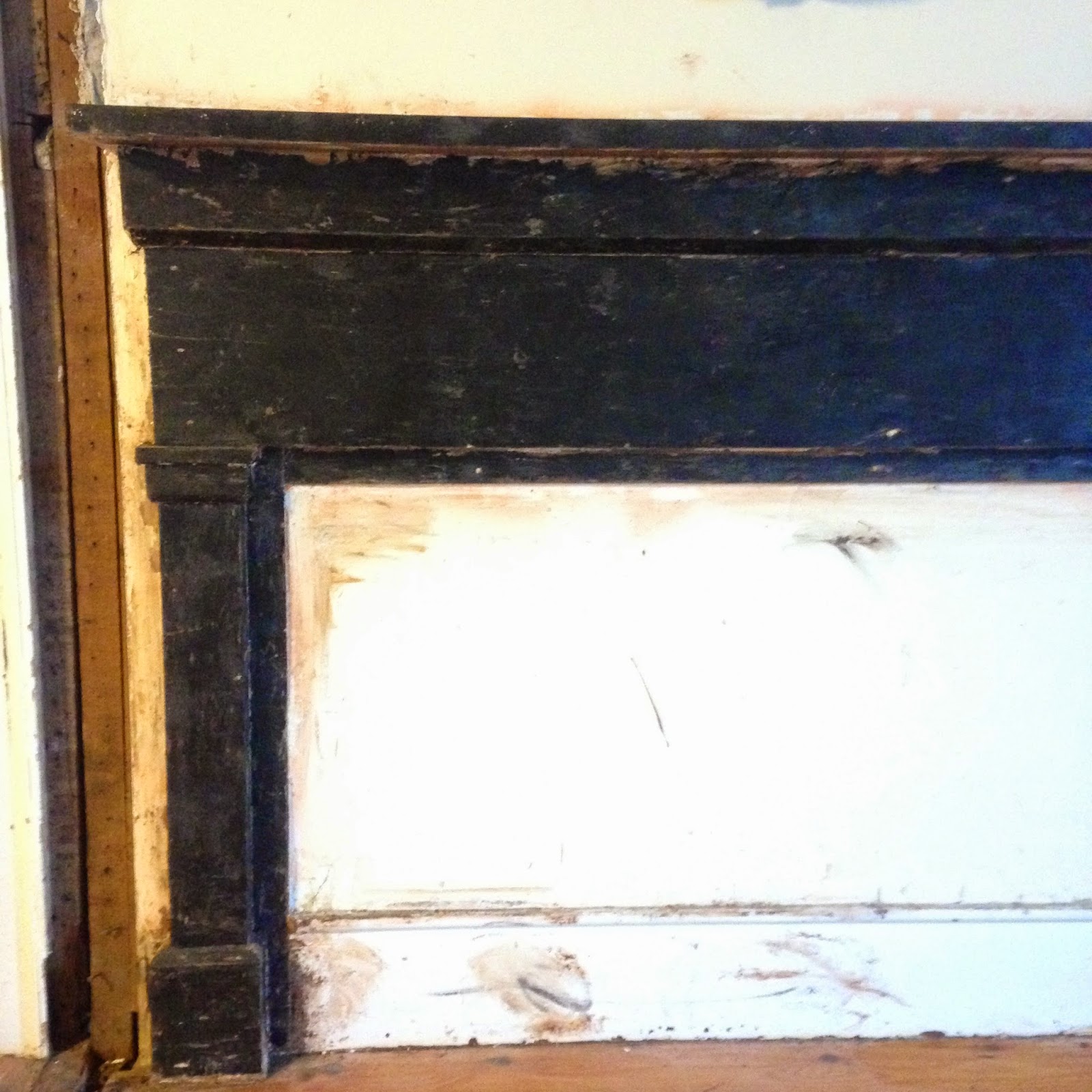 Okay this project was not planned.  I had two half used cans of paint remover in the city apt that i brought up with me on Thursday night.  No idea why but here we go.  So after plumbing and moving and filling and sanding the room all day Friday i thought why not just spray a little paint remover on here.  So thats what the first photo is. Removing paint is possibly the messiest thing to do.  Its disgusting. You can't get it on you as it stings your skin.  It goes everywhere, and once its on you have to work really hard to wipe it off. Just not a project to do unless you really have the patience to do it without any gauratee what would be underneath.  Why would i do this? Its was Friday at 7pm and i had nothing better to do.  So after scraping away it look like the first photo.  Not great but i thought maybe i could work with an antique white look??? But look at the second photo, its on the top right.  On the far right of the fireplace there is a tiny black rectangle at the top of the "leg".  This was under a very hard layer of white paint that i chipped off.  It looked like the wood was stained dark dark brown, or black.  It was 9 pm by this point.  No chemical was going to get the white/brown layer off.  SO i got the blowtorch out.  Should have been a heat gun, but needs must.  I went to town.  Heating that paint till it was a bubbling mess and scraping it off.  Went through two scraping knives.  BUT look at it.  Its amazing.  I love a black fireplace.  BUT an original, sort of Ebony fireplace, with all that patina and age.  Its insane.  Or i am.  Midnight i stopped, i figured tiredness, a naked flame and a wood house with a taxidermy deer in close vicinity was a recipe for disaster.  But i can't tell you how chuffed i am with that fireplace. If i was picking a fireplace to buy it would be this, and weirdly enough i built a fire surround for the city apt and its nearly the double of this.  That was three years ago, and thats just plain boring painted black.  I think you get the point, i love this surround. 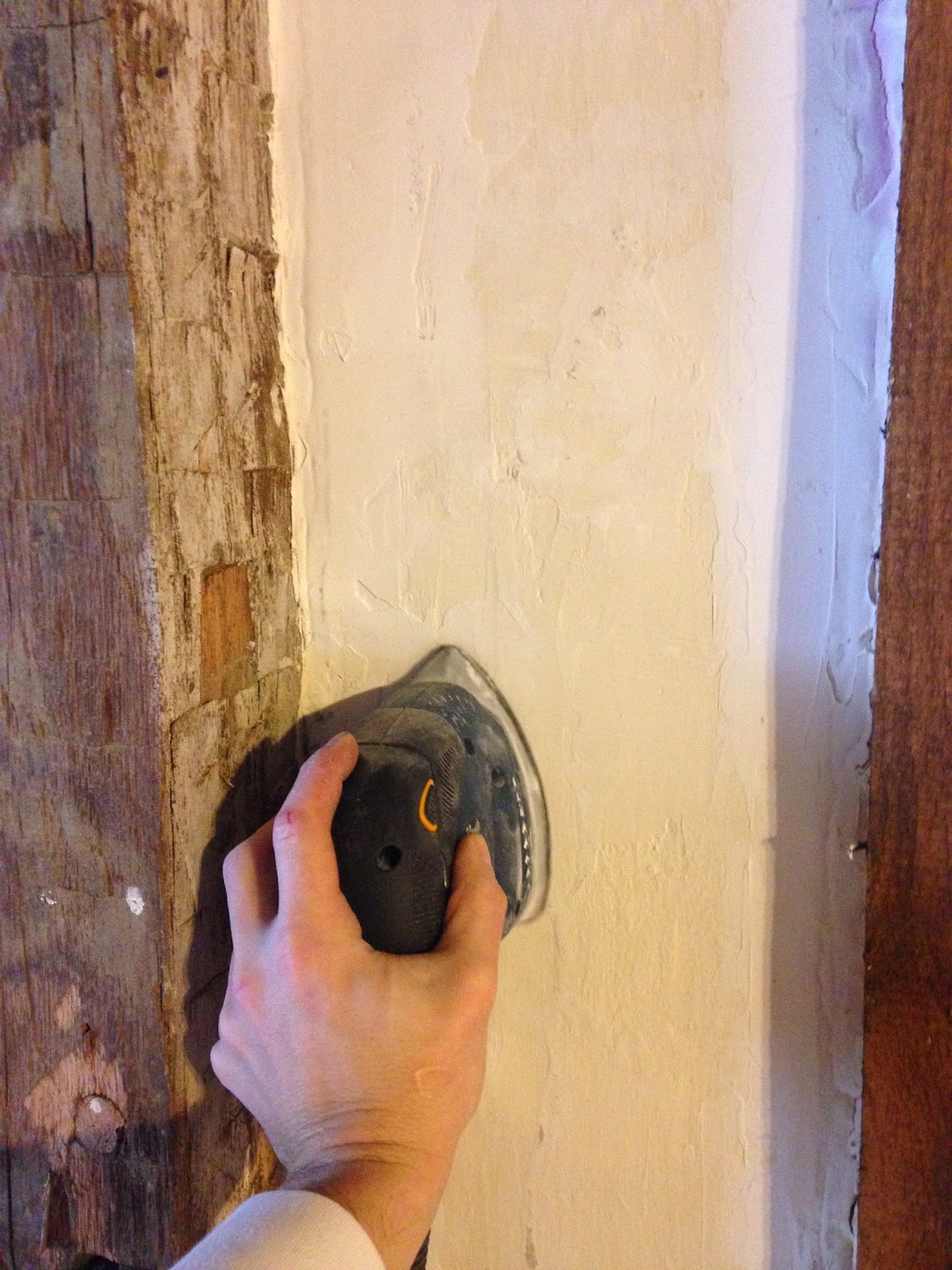 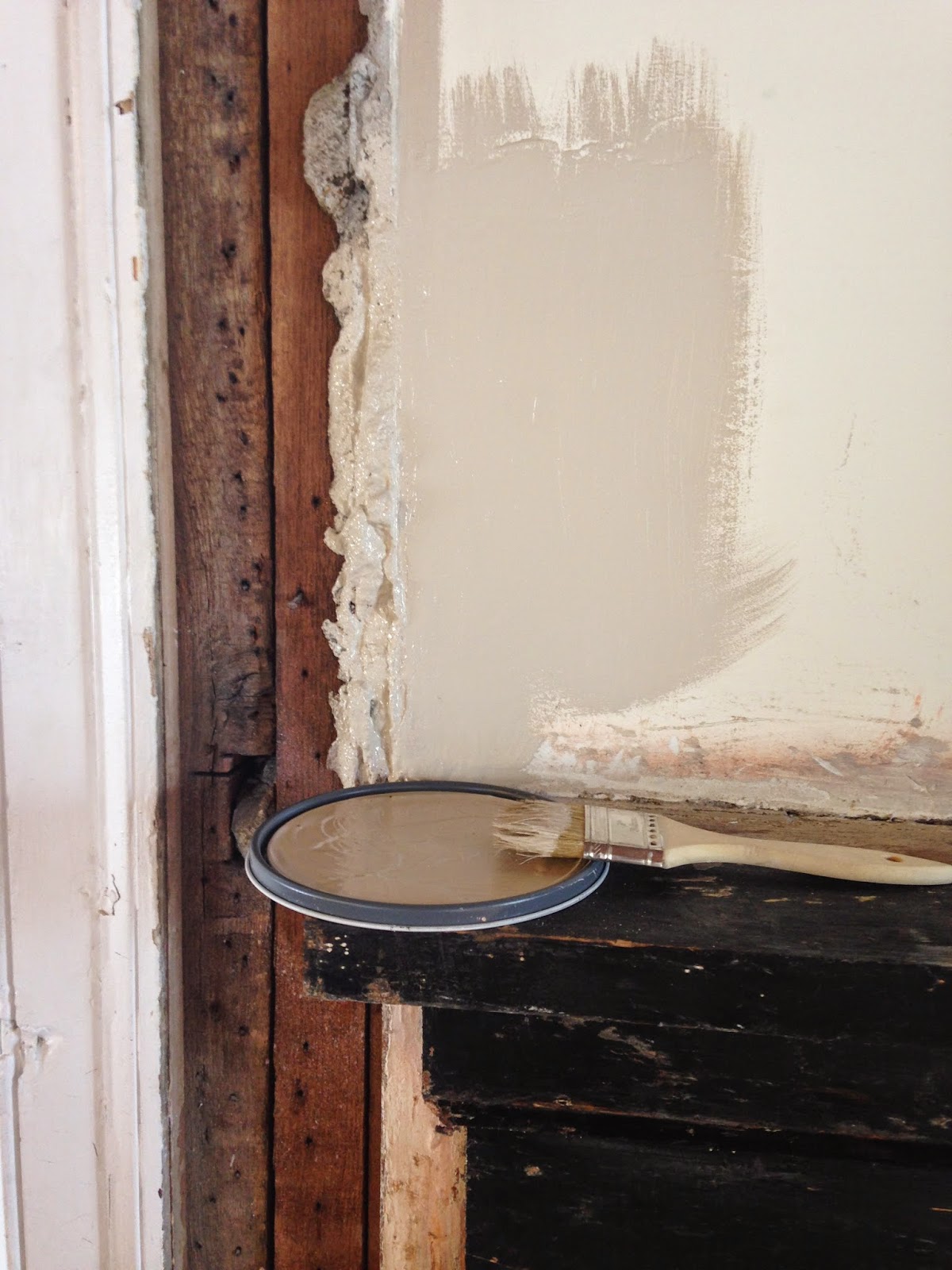 What an amazing photo! yes thats my hand and a sander.  I know your so interested.  I took the damn photo so you have to look at it.  This is just to smooth some of the plaster lines to make them look "worn" in.  Yes this is how i think.  But look at the other photo.  That colour.  I would love to say i spent hours selecting the perfect shade of browny cream.  I looked at farrow and ball's colour card and had it matched to a cheaper paint.  Matt finish of course.  Once the paint goes on the room feels so finished, or at least it feels like a room you can be in.  I really lucked out with the colour, its warm and neutral and lovely all at the same time. 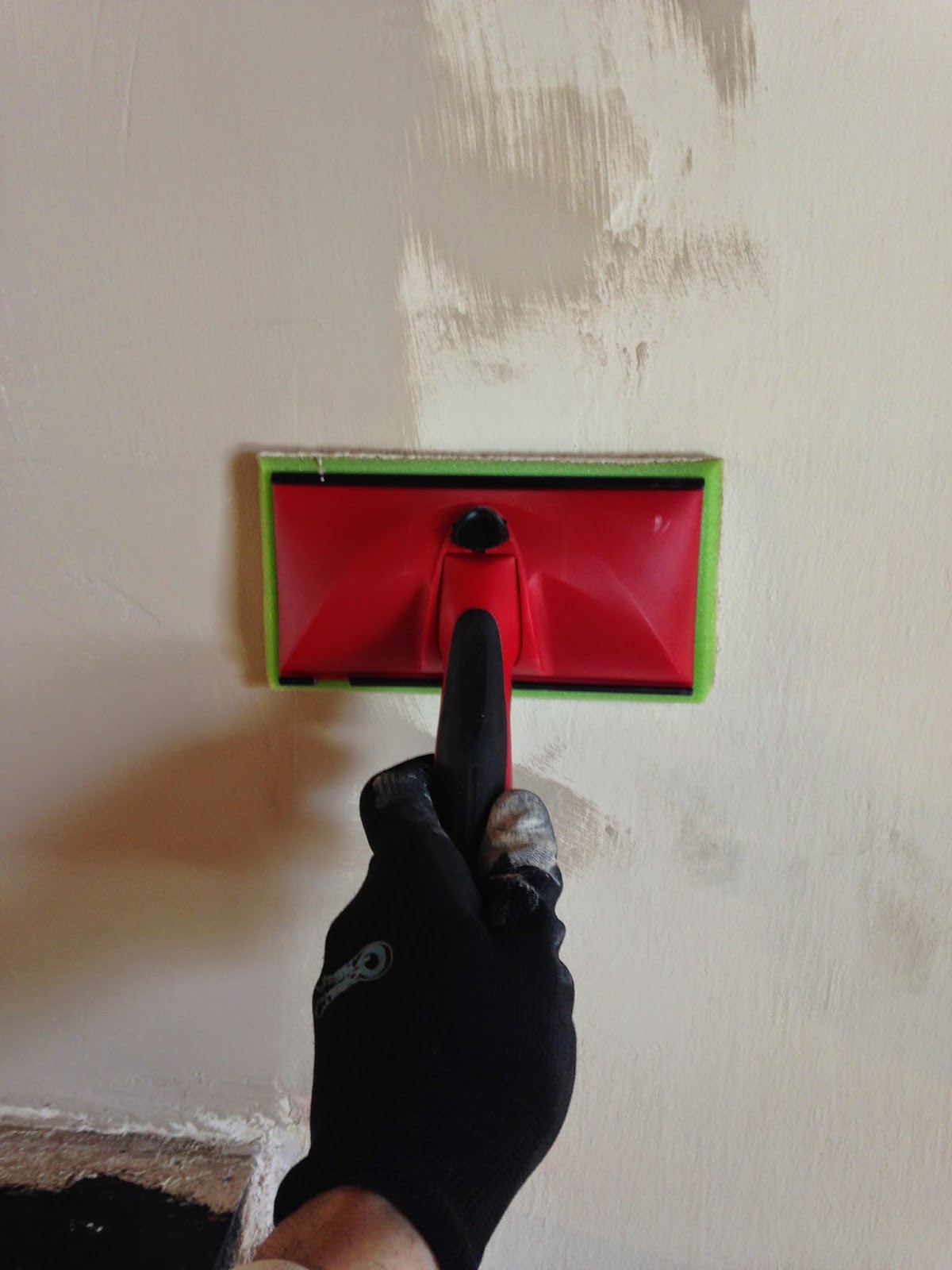 Action shot of me painting.  Some people use a brush.  Others use a roller.  I love me a pad.  Its like a big sponge that you wipe over the wall.  You probably get better coverage with a roller but the spattering and mess always bothered me.  So this is a really simple, quick way to paint walls.  So dear friends came over on Saturday to help paint, they hated the pads so after initially trying stuck to a brush! 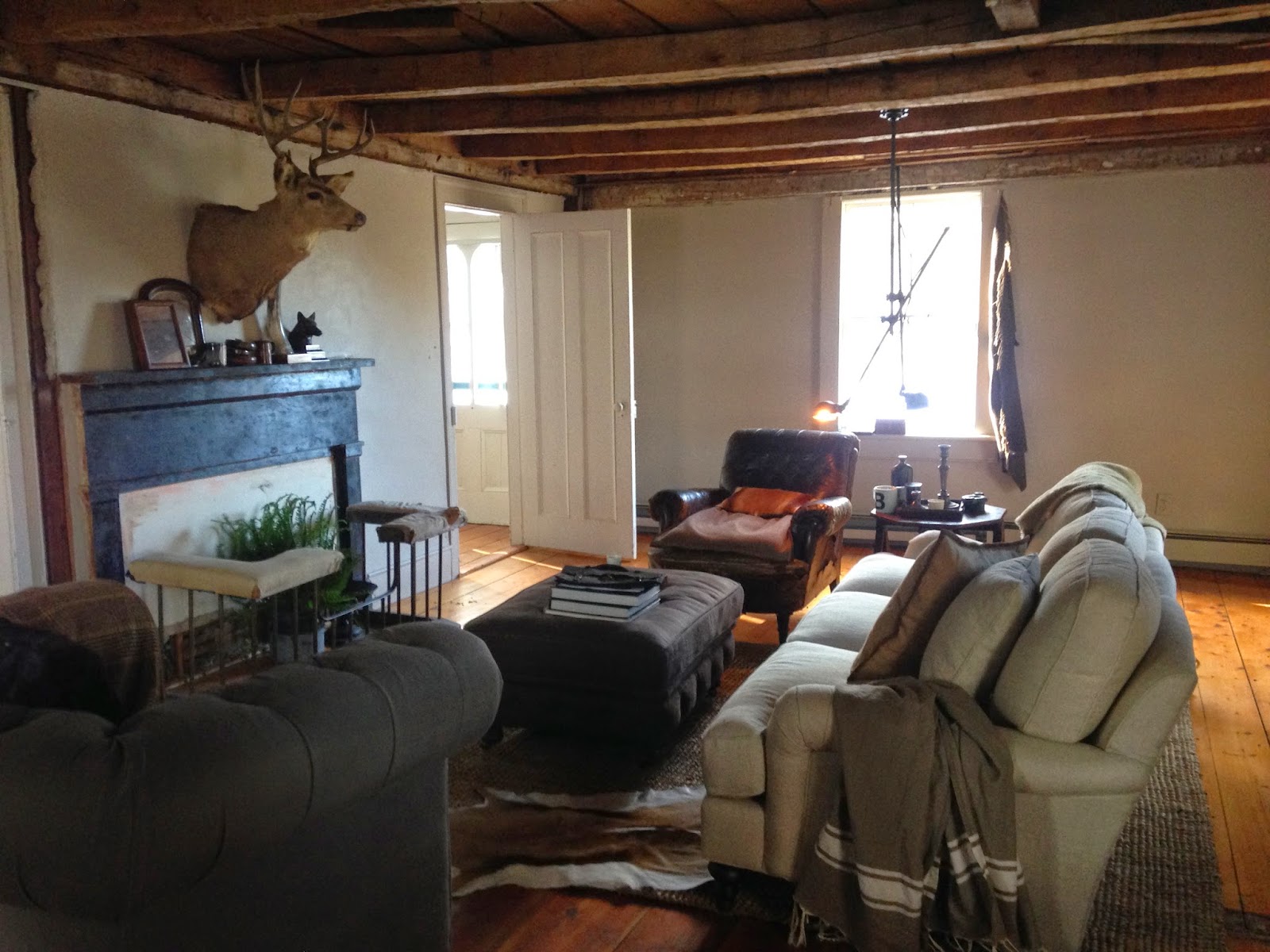 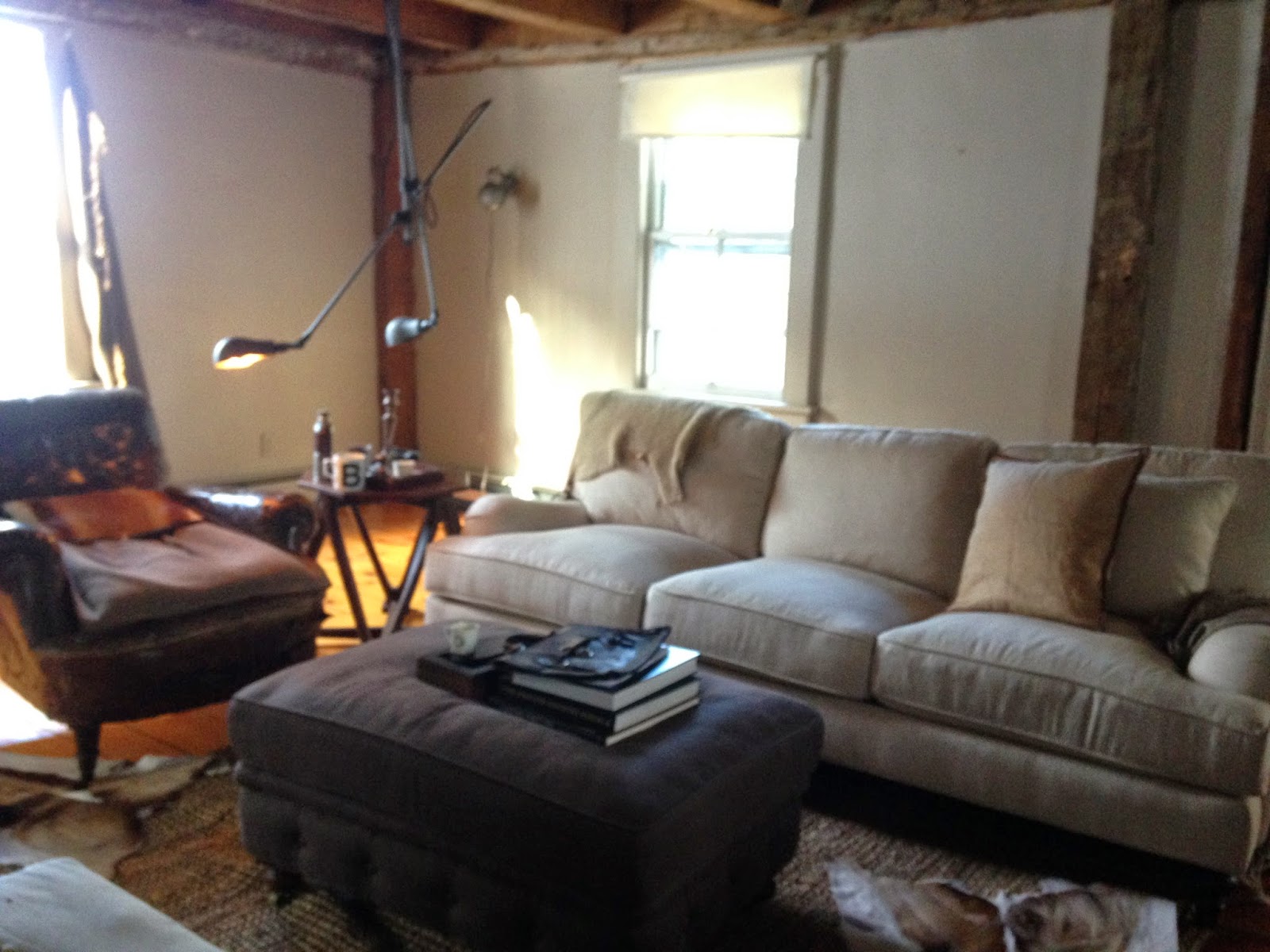 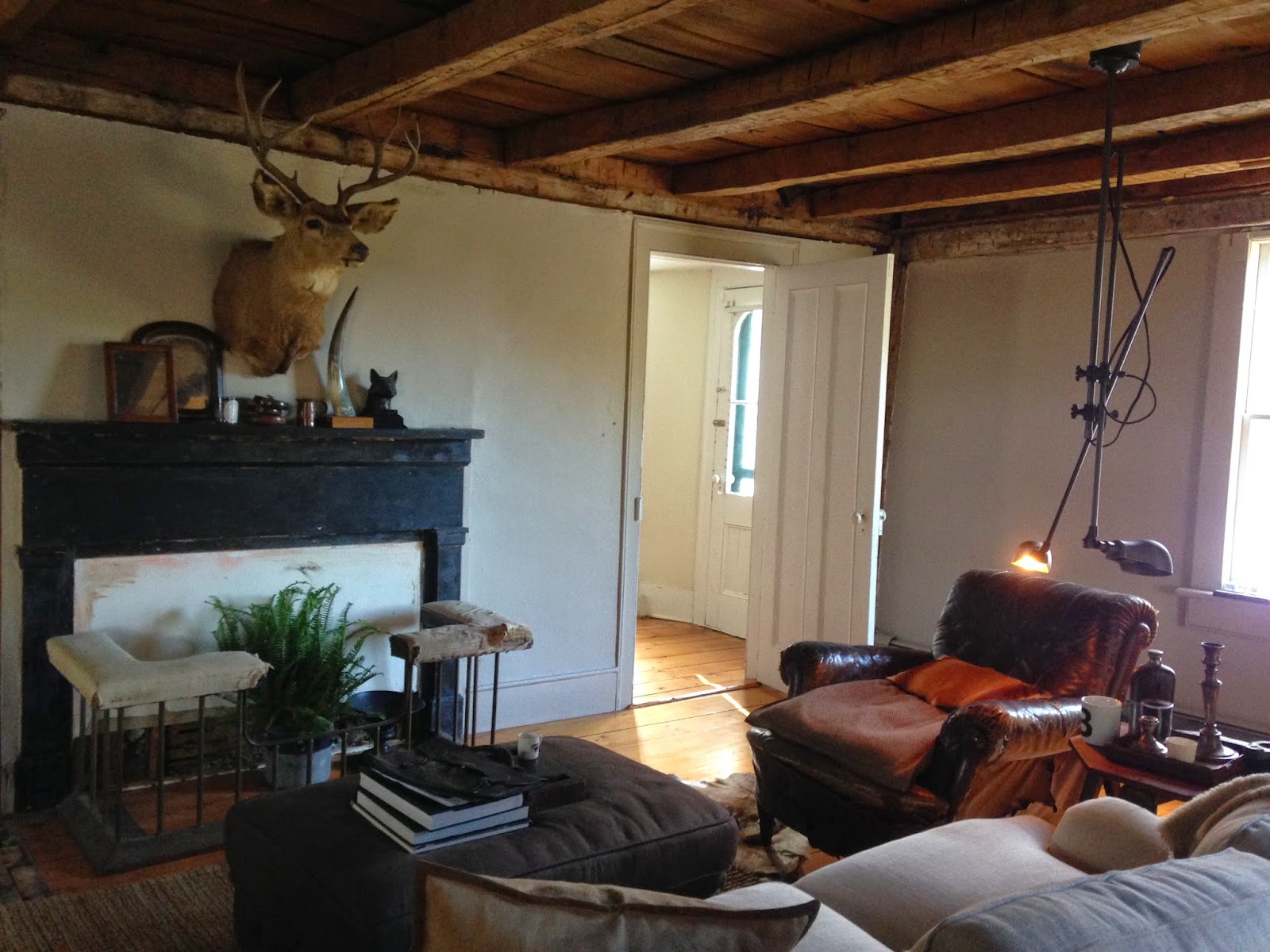 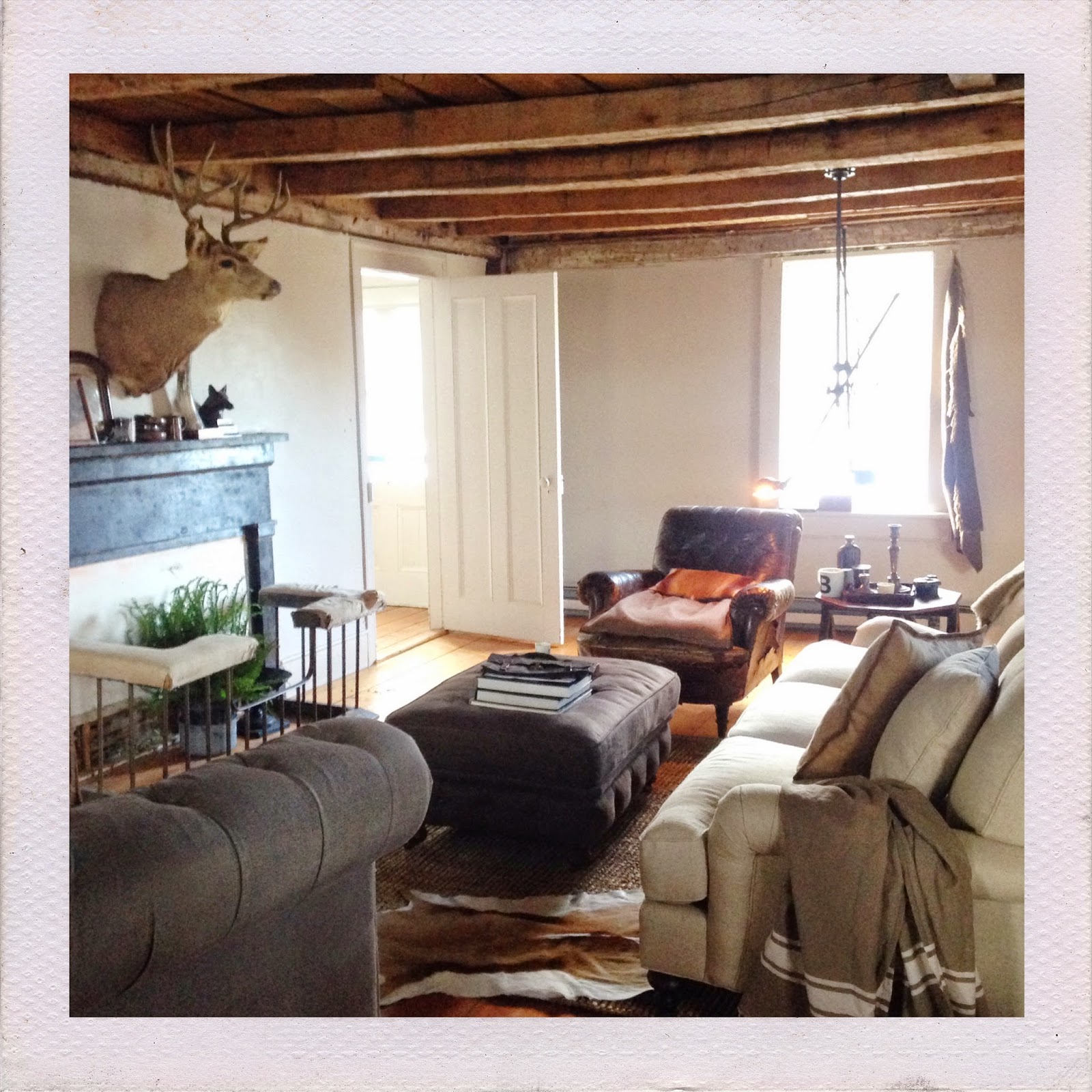 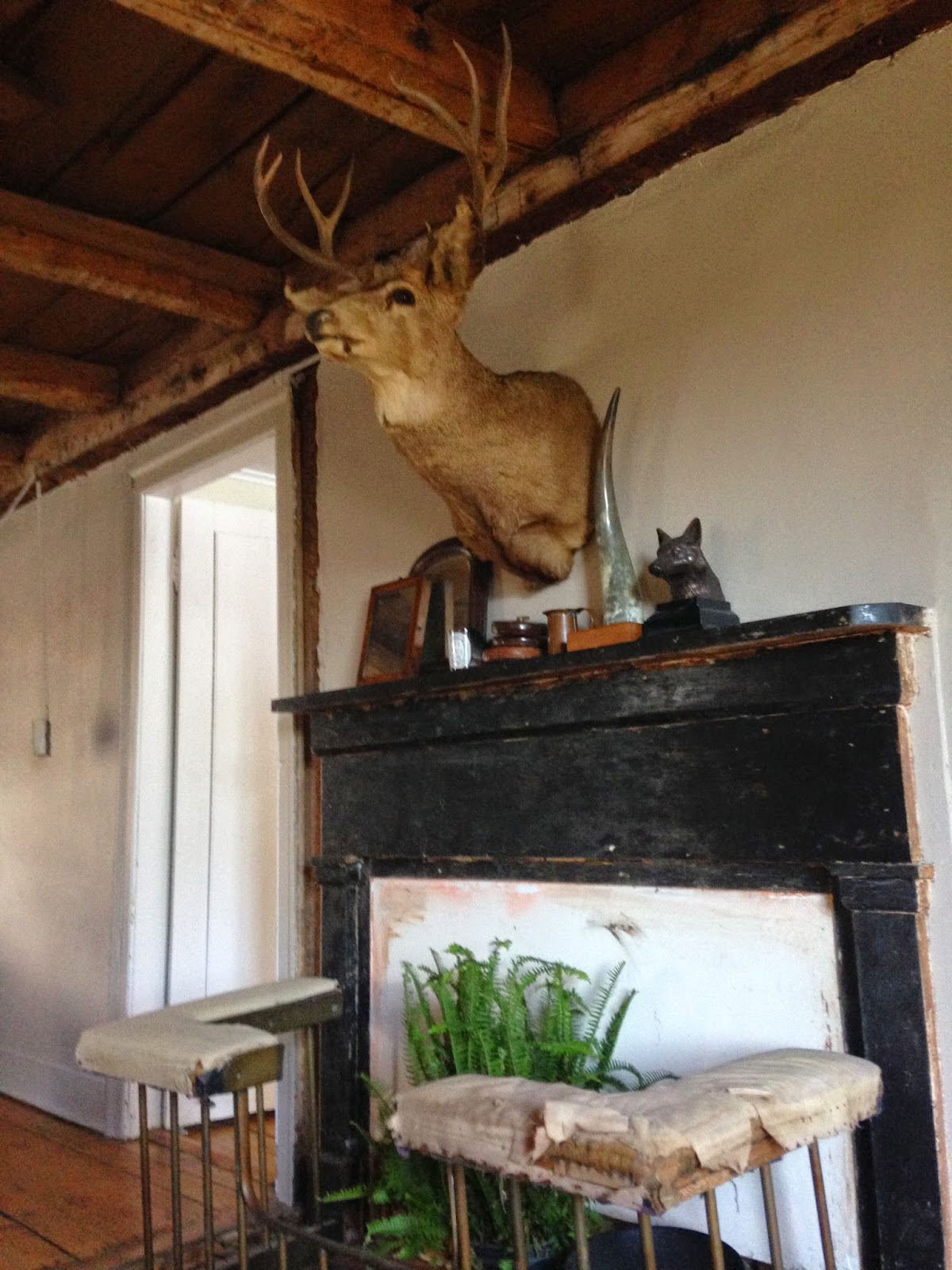 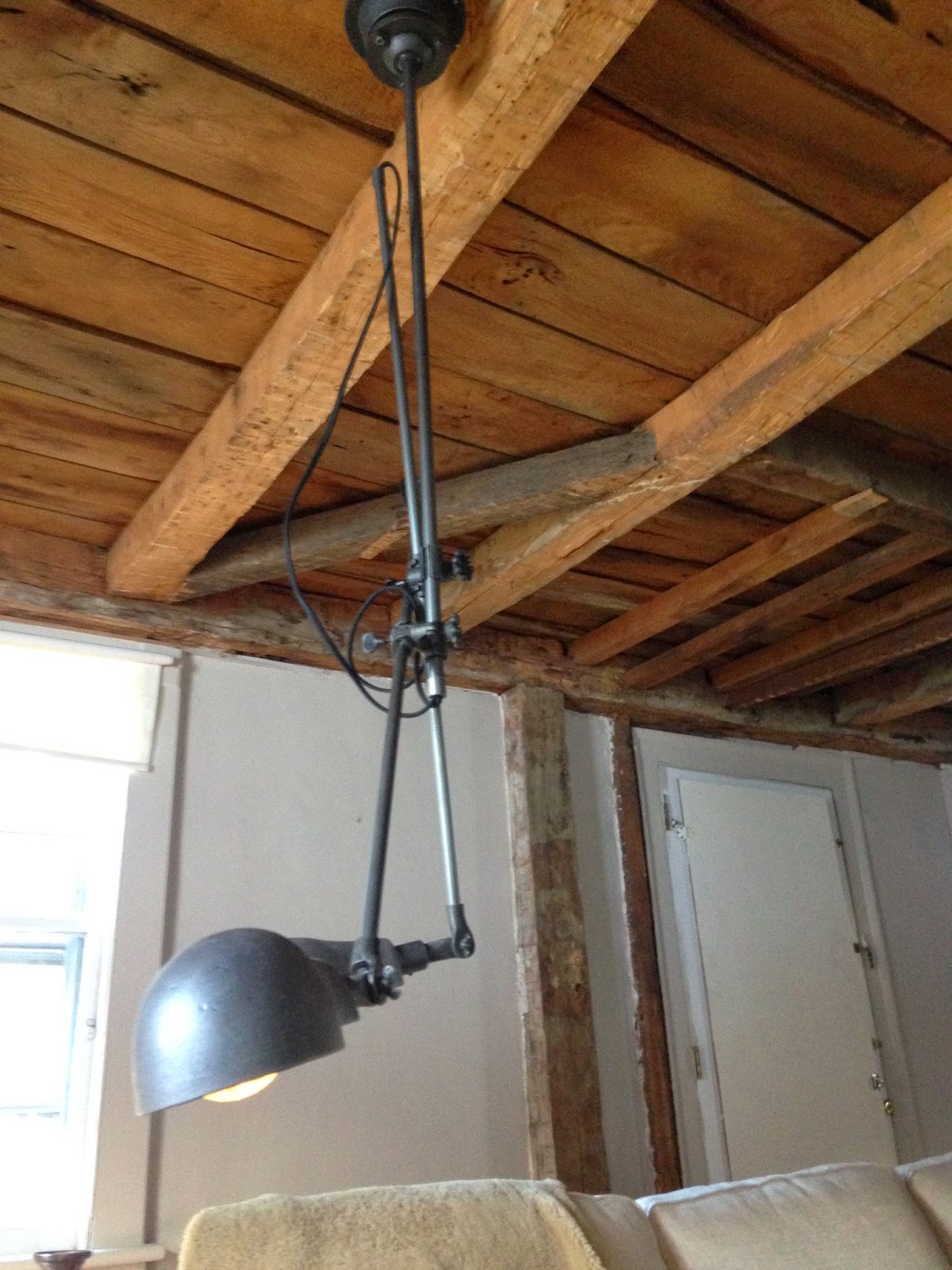 So what do you think?
Its obviously not completely done, but this is how the walls and ceiling should be.  There needs more furniture, more bits and bobs.  But on the whole you get the vibe.  There is a large jute rug then smaller animal skins over it so it doesn't become to hunting lodgy.  There is another skin on the way and i just really like layering all the rugs together. I really like sitting in here and looking at the ceiling.  Sounds weird i know but its so great to look at.  Im trying the light fixture suspended from the ceiling and i quite like it.  I think i may get another one for the right side of the sofa.  They are from restoration hardware, as much as i hate to have RH lamps as there is so many great vintage ones out there.  We will see.  I had originally planned this for over the dining room table but I feel like it will continuously evolved so there is no harm in wiring it in and trying.  I do like it coming down from the ceiling over the table.  Also i never imagined the odd furniture together but it really does, again for now.  The chocolate brown chair will probably move back into the dining room and i would love another leather arm chair but the hunt will go on for that.
Also the fire place needs it wood burning stove. Im researching as i have found this guy.  Totally ventless, the flu is "fake".  Im not sure if it looks that good in really life, or if I'm being seduced by the tea pot, but this is the top runner.  It will throw of some heat, give the ambiance of a fire, but the illusive crackle and smell of wood smoke will be missing.  This is about 4k cheaper than what i would have to do to install a real wood burning fire, and its better for the environment.  Just thought i would trot that fact out to sell myself a little more on it.  Again doesn't have to happen immediately but knowing me i will order it this week.  SO much more to write but I'm beat and wanted to get these photos up.  Would love to hear your thoughts and questions in the comments...
b
Oh the truck didn't break down, it was a good weekend!
One more thing, here are the before shots of the two rooms before i put them together 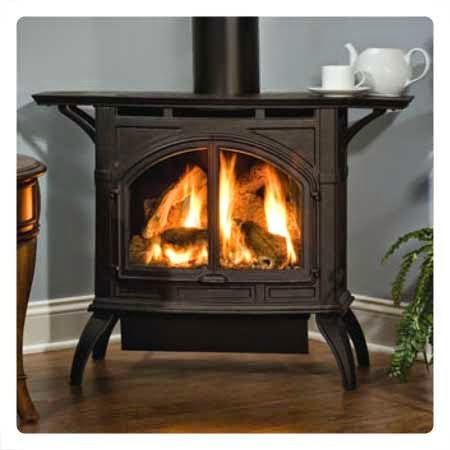 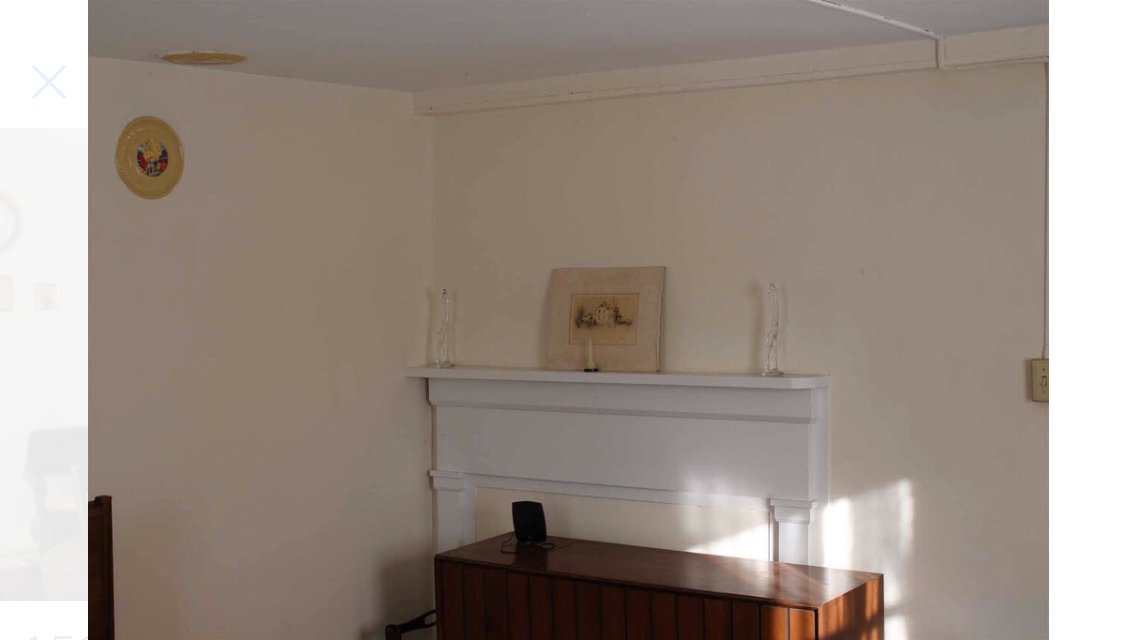 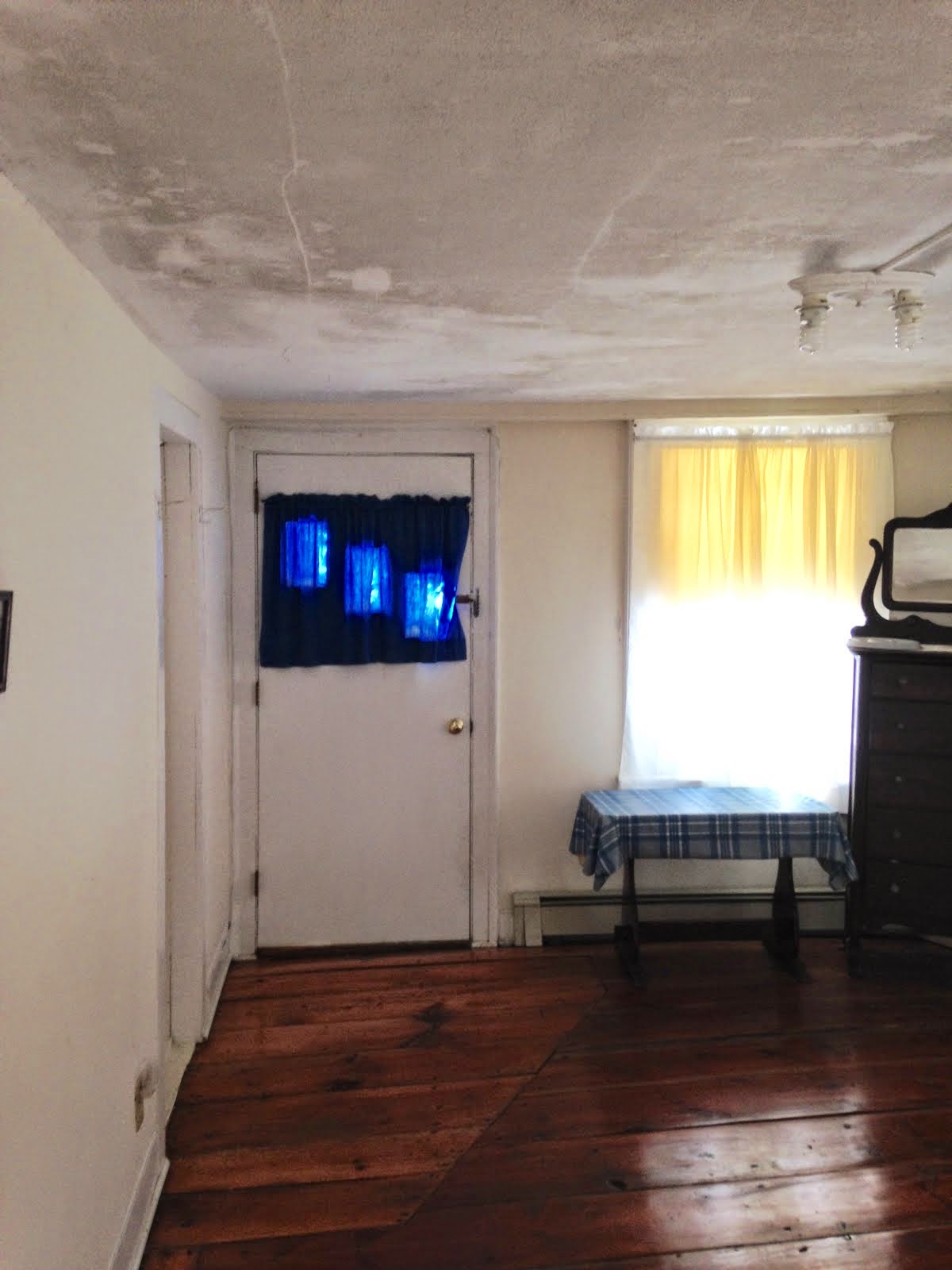